“Let’s toast to the successful journey of Ian Evans, “we said, and after the clinks we sipped our MacKinlay’s Shackleton Whiskey. We were celebrating the bravery of our 58 year- old Canadian friend who had completed a journey of forty- four days and 950 kilometers. He and three others skied from the Ronne Ice Shelf to the South Pole in December and January of 2014/15 pulling heavy sleds of supplies.

Ian carefully removed the whiskey bottle from it’s elaborate cardboard case and pulled it from a straw wrapping, making it look indeed, like it dated from the early 1900’s.

The taste was heavenly and is described on the whiskey’s website:

It reads: “delicate aromas of crushed apple, pear, fresh pineapple with notes of oak shavings, smoke, hints of buttery vanilla, creamy caramel and nutmeg.” A talented nose would recognize all of those flavours, but it tasted very fine to us.

His good friend Rick had earlier learned of this perfect gift for Ian’s return while listening to a CBC radio broadcast about the distillery Whyte & MacKay bringing back to life the taste of the whiskey that Shackleton had taken on his journey to the South Pole in 1907.

I went in search of the story from the Shackleton Whiskey website and here is what learned:

On July 30,1907, Ernest Shackleton gathered the crew he had recruited through a newspaper add and headed out on the ship Nimrod, from the East India Docks in London, England. The ship arrived in New Zealand in November of that year. On January 16, 1908, they left for Antarctica and entered McMurdo Sound on the 29th of that month. From February 6 – 24th, they built a hut to act as a base camp at Cape Royds. That hut still stands to be visited and is preserved by the New Zealand Antarctic Heritage Trust. 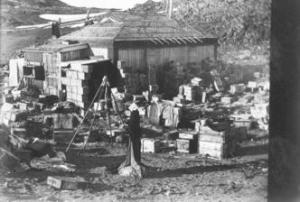 Shackleton headed off with his party of five to reach the South Pole in October of 1908. For Christmas celebrations they enjoyed plum pudding, brandy cigars, and a spoonful of crème de menthe. When they were 97 miles from the Pole, Shackleton made the difficult decision that they must turn back or die of starvation. They planted a flag and headed back, arriving on February 28, 1908. He returned to England a hero for his efforts. His subsequent explorations continued.

Before the expedition began in 1907, the Glen Mohr distillery received an order from Ernest Shackleton for forty- six cases of MacKinlay’s Rare Old Highland Malt Whiskey to be included in the provisions of the expedition.

Jumping forward 100 years, in February of 2007, 3 crates of the whiskey were found encased in ice under the hut at Cape Royds by a team from the New Zealand Antarctic Heritage Trust while working on a conservation expedition. They could not, however be removed, unless used for conservation or scientific reasons.

In early 2010, permission was received to remove one crate and it was flown to the Canterbury Museum in Christchurch, New Zealand, for thawing and stabilization. This process took over 2 weeks and it was slowly taken from -20degrees Celsius to 0 degrees. It was then returned to Antarctica as part of the 14,000 artifacts the New Zealand Antarctic Trust watches over.

In January 2011, some of the whiskey was flown by private jet back to Scotland to W&M’s Invergordon Spirit Laboratory for analysis. A team led by Dr. James Pryde spent weeks nosing, tasting and deconstructing the whiskey to “reveal it’s true heritage.”

Now produced by the Whyte & MacKay Company (owners of the MacKinlay brand) for all to taste history, it is marketed in a way that reminds us of the brave accomplishments of the men who travelled to the ends of the earth to learn about Antarctica? The whiskey is bottled in glass created with the look of old. Reproductions of photos from the expedition, maps, copies of letters and the story come in an envelope with the straw encased bottle, to tell the story of Shackleton’s expedition. And brave men, and women, are still setting out to experience the same inhospitable landscape – men like Ian Evans and the three men in their expedition. He deserved a toast with such an exquisite whiskey after the difficult two- month trip.

I felt privileged to share a drink of a taste so close to what Shackleton and his men sipped to celebrate special occasions and keep their spirits high in this hostile environment.

Only one question remains to me, a mystery.

Why did Shackleton’s men leave three cases of whiskey behind?

Only Shackleton knows that answer.

To learn more about Shackleton Whiskey, please view the entertaining website at: