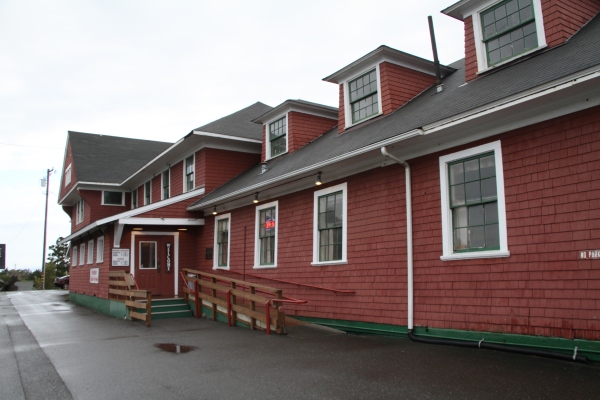 We started with biscuits and gravy for breakfast at the Samoa Cookhouse in Samoa, California, but that was just the beginning of our lumberjack dining experience. We were about to taste breakfast the way the lumberjacks were fed at the cookhouse after the mill opened in 1890 when the redwood sawmills were buzzing with activity.

The night before we had camped in a redwood forest amongst stumps larger than our camper van. We walked with craned necks through the forests, learning about the giant sequoias and redwoods; how each one creates 500 gallons of water each day; how the largest may be as old as 2000 years, and how each tree has several differently shaped leaves.

“How could anyone cut such a beautiful tree down?” we wondered.

At the turn of the century 2,000,000 acres of the Californian coast were covered with sequoia and redwood forest. In Eureka, California alone, in 1853, there were 9 sawmills producing lumber to build the booming towns. Eventually 90 percent of those trees were gone and we are left with just a glimpse of the majestic forests.

It took days to cut down just one tree and the lumberjacks worked twelve hour days, six days a week. The camps that hired the men housed and fed them and the Samoa Cookhouse is the last standing of the company cookhouses that fed the workers in that area.

And the men were fed well. When the cookhouse whistle sounded, even the white horses that worked for the lumberyards, would stop dead in their tracks and wait to be led to their oats. The men rushed to their seats in the cookhouse and waited for young women to serve them, by loading the tables with platters of food. All meals were served family style and the men stretched across the tables to help themselves to as much food as they could eat. Nobody left hungry. 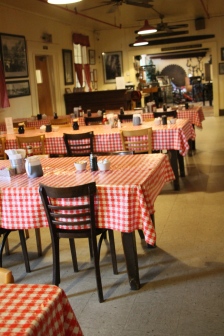 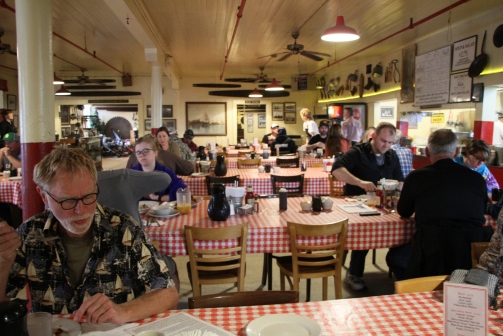 The interior of the cookhouse remains authentic with checkered tablecloths and wooden floors and ceilings. Historic pictures and antique treasures cover the walls, giving diners a peak into the working lives of the lumbermen.

The current manager, Jeff Brustman is passionate about ensuring that diners taste food prepared as authentically as possible, making the experience a trip back in time. He told me of an old tin recipe box full of the recipes and when I asked, he proudly retrieved it from the kitchen. Serving authentic food requires an extra effort, as the bread, biscuits and most of the food are made fresh each day on site.

Just as the lumberjacks could eat as much as they wanted, so the guests of today are offered endless portions. 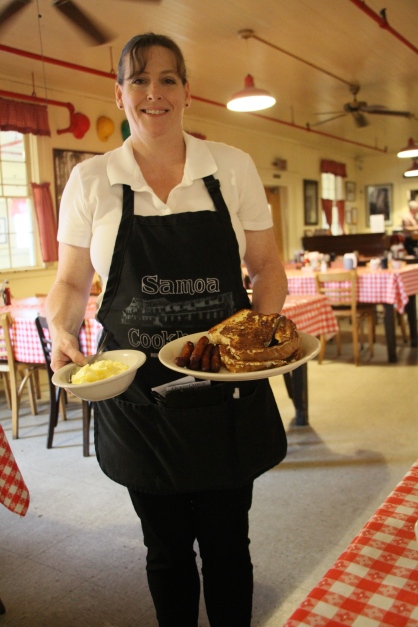 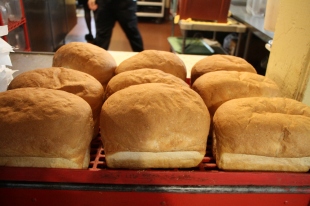 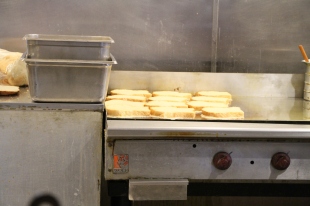 Our waitress explained that we would first be offered orange juice and coffee and that everything would be served “family style”. We started with two biscuits and gravy, followed by scrambled eggs, sausages,  and French toast with syrup. Second helpings were heartily offered. Because I would be sitting in a camper van driving all day, and not cutting giant redwoods, one serving was more than enough. But for the lumbermen, as many helpings as it took to fill them was served.

The young women who were employed by the lumber camps were always single and lived upstairs on the premises. Although the rules were strict, they often found ways to break them. Curfew was 10 pm but they found a way to sneak in after hours. They were known to be mischievous and would often play tricks on the men, such as filling coffee mugs with water so that when the coffee was added …

The whole experience of dining at the Samoa Cookhouse is deepened when followed by a stroll through the museum beside the dining room that is filled with historic photos and memorabilia of the lumberjack days. The men standing on giant stumps in the photos may have enjoyed their meals at the Samoa Cookhouse.

What a gift to be able to experience dining in the same room as the lumberjacks and enjoy the same tastes from California’s past.