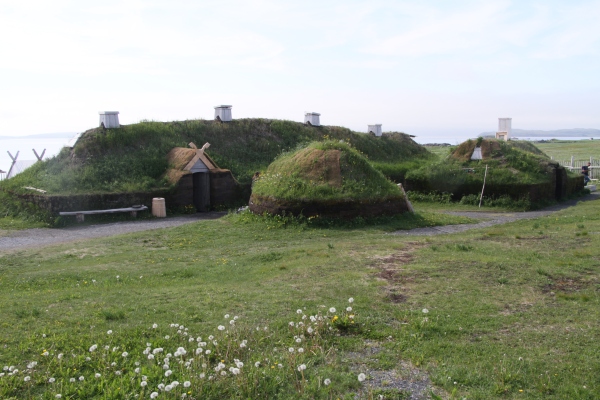 Britta sat in a dark, longhouse made of blocks of sod, mixing ingredients in a small pottery bowl. She wore the heavy, warm woolens of a Viking woman and was about to mix some flat bread. I was waiting back in time to taste the results.

After walking along a boardwalk through what looked like a miniature forest (the trees grow slowly because of the harsh environment,) I came to several buildings covered in sod. It was not hard to imagine I was visiting a Viking settlement one thousand years ago. But I was in Newfoundland, not Greenland. Archeologists revealed a Viking site at L’Anse aux Meadows in 1960 and now Parks Canada protects the land where the Vikings settled and has recreated several of the sod structures where costumed characters bring the site to life. It is also a World Heritage site making this worth the long trip to the north of Newfoundland. Strangely enough Vikings travelled to Newfoundland in search of hardwood, something that was in short supply in Greenland. It was needed to build and repair their boats so L’Anse aux Meadows became an outpost. The journey from Greenland to Newfoundland took 63 days and was 600 nautical miles. Groups of Vikings would come to the outpost for periods of one to two years. After crossing the Davis Strait, their ships followed the coast of Baffin Island, to Labrador and Newfoundland. At L’Anse aux Meadows, the remains of eight buildings have been uncovered. It appears that each of three ships built a longhouse that became home for twenty to thirty men and women.

What the Vikings ate when they lived in Newfoundland

In Greenland they raised cows, sheep, goats and produced dairy products. But did they bring the animals with them? From the archeological dig findings they do know some of what the Vikings ate in L’ Anse aux Meadows. They ate caribou, seal, and fish. The grains they used included rye, spelt, oats and barley.

In the morning, they may have made porridge of grains. For other meals they likely ate stew made with caribou and vegetables or soups made of vegetables in broth. They are known to have eaten duck eggs. Pottery was found at the site, so dishes were made and hallowed animal horns were used as cups. A form of alcohol called mead was made from grains and honey.

Butternut shells were found and it is known that they did not grow north of New Brunswick.

The Viking interpreter known as Britta was making soup and flatbread when I arrived. The soup was a mixture of water filled with vegetables cooking in a round-bottomed iron pot that hung over the fire.

Britta put into a pottery bowl a mixture of barley flour, rye, spelt and ground oats together with some water and mixed in some dried berries to add sweetness. She mixed it together until it became dough and formed flat bread. She melted some fat on a long handled flat iron skillet and held it over the open fire. She flipped it to cook the other side.  The bread tasted surprisingly delicious considering it was made with such simple ingredients.

I ate my piece of bread in the dark longhouse, lit only by fire and the few strands of sunlight. I sat beside big Viking Egil and in drifted a gruff Viking woman named Tora. I imagined what it would be like one thousand years ago, sleeping on furs on a raised platform, in the damp sod longhouses with the winds howling outside. It would have been a job just to keep the fire burning all the time. The Viking men would bring caribou meat to be cooked and between preparing the skins to be used for clothing and weaving cloth for clothing, foraging and cooking there would have been little time for rest.

Beside the wild ocean of the Atlantic I enjoyed a taste of Viking life and food at L’Anse aux Meadows thanks to Parks Canada. 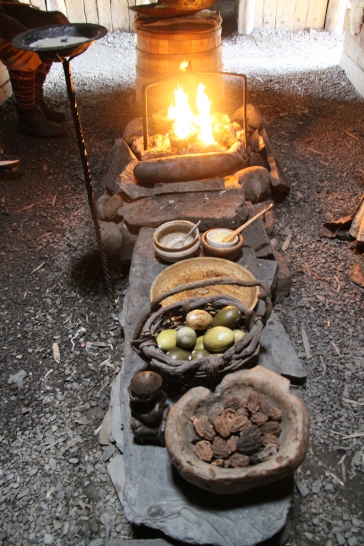 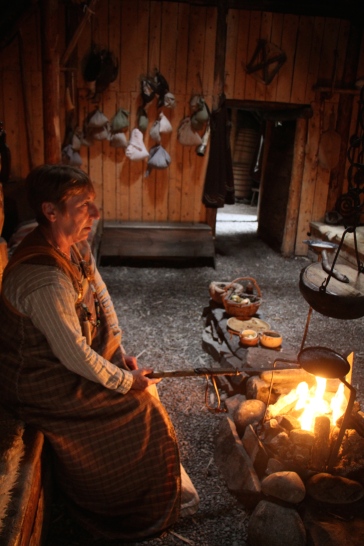