Antonio Câmara from Pro Island Tours (pictured above with his son), picked up seven enthusiastic students from the lobby of our hotel. We were ready to learn how to cook traditional food from Terceira. He packed us all into his Land Rover and sped across the countryside of Terceira, one of the islands of the Azores.  We wondered where he was taking us, but enjoyed the bumpy ride quietly, until we stopped at our destination. The setting for our cooking course was to be held in a park. A stone shelter with tables and benches looked welcoming amongst the moss covered ground and high trees of the forest that climbed up the mountain behind us.

A large stone open fireplace and wood oven held a raging fire. We were going to prepare a traditional beef dish, Alcatra and bake bread, both to be cooked in the wood fired oven.

“Let’s get started,” said Antonio, right away. This feast would take awhile to put together and cook. He and his son assistant were well prepared with all the ingredients ready on a large round table made from a giant tree stump. 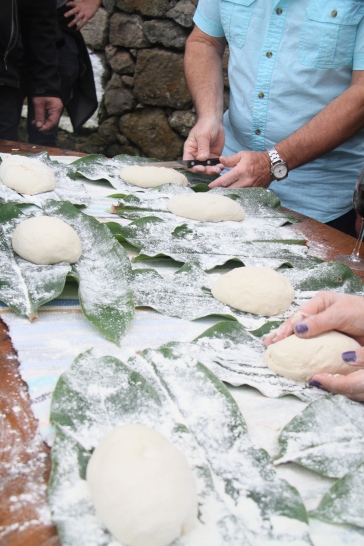 We added the bread ingredients to a large bowl, first mixing the yeast with salt, sugar and a little warm water. Baking powder, olive oil and then the flour were added. Now Antonio did once own a pizza shop, so that explains why he could just “feel” the amounts of each ingredient to be added.

It reminded me of how the women of the island would have, and maybe still do cook; measuring by “feeling,” rather than cups. The ingredients were mixed, kneaded and formed into round loaf shapes and put in the bowls to rise. It was a rather damp and chilly day so the bowls were put inside the shelter and covered with a heavy blanket, a rising technique I had never seen.

And Now for the Alcatra

Next we would make the Alcatra, a very popular traditional meat dish served on Terceira. Different versions can be made with beans or fish, but can never be made in the same clay pot as the beef version. High quality grass fed beef is readily available on Terceira and using good beef is considered to be important to the success of this dish.

Antonio put a large unglazed clay pot called a alguidar in front of each of us. It looked something like a big clay flower pot with no hole in the bottom. The first time it is used, it must be soaked for two or three days before making the Alcatra, we were instructed. We coated the inside of the pot with pork lard. The importance of using an unglazed pot, he explained, was so the tastes and clay become one. The heat radiates through the clay on all sides of the pot giving an even heat during the cooking process. Traditionally they would put the pot in the wood oven to cook all night, and let the heat die off gradually.

We greased our pots, chopped the onion, and chopped one clove of garlic, (Antonio adds a cube of bouillon,) put it all in the pot and covered with hunks of fatty bacon. We cut and laid large pieces of beef (from a rump roast,) with the boniest pieces on the bottom, filling the clay pot to the top. The pot we used held about 2.5 pounds of beef. Spices added were: 10 whole allspice cloves, 10-12 whole black pepper cloves, a dash of cayenne, and clove leaves. The pot was then filled with red wine right to the top. A little white wine can be added as well. The pot was covered tightly with aluminum foil tucked in around the edge and was ready for the oven. If cooking this in an electric or gas oven, it should be put in a cold oven and allowed to heat gradually.

Walking up into the woods we picked some wild ginger leaves to hold our loaves of bread during the cooking process. Ginger plants are not indigenous to the island and now grow voraciously. What looked like large orange flowers were pods left after the blooms had died. The leaves were large and glossy.

When the bread had risen and it was ready for the final bit of kneading , we finished by rolling it into a circular shape with our hands and made shallow cuts on the top surface. We sprinkled flour on the washed leaves and added the loaves, now ready to place in the oven. (see image above)

Loading the wood oven with our food was a process. The burning embers were pushed to the back of the oven. The temperature needed to be correct. Antonio’s elders taught him to put his hand in the oven after the fire had been blazing for hours. He was taught that if you could say the rosary before having to pull your arm out from the heat, the oven was ready. Antonio just seemed to know by feeling when the oven was ready for loading.

We carried the clay pots to the oven with long metal poles that held the pots – a bit of a balancing challenge. When they were all in place we pulled the loaves of bread on ginger leaves onto a long handled wooden paddle and carried them to the oven, giving a little jerking motion to push the loaf into the oven. We placed the bread closer to the front of the oven as they needed less time to cook.

Antonio had cleverly brought a few pre-cooked pots of Alcatra from a previous class to heat in the oven so that when our bread was finished we could enjoy a feast. The Alcatra we put together continued to cook in the oven for a future class to enjoy. Antonio told us that in the past, Alcatra was stored without refrigeration. The fat congealed on the top of the cooked pot, he assured us, and it would keep for months. Not something to try at home, but an interesting bit of history.  It was finally time to taste our results.

We feasted on succulent, tender pieces of beef in a wine and spice sauce that resembled no dish I have ever tasted. The clay in the pot and the grass fed beef must make the taste extra special. Alcatra is traditionally eaten with bread to soak up the juices and we enjoyed our loaves hot from the oven. Antonio added salads and a local liqueur called Grappa making it a perfect Azorean feast. He and his son proudly shared their cooking talent and traditions with our group. We also dined as if we were a family from the island enjoying an outdoor picnic in their beautiful park surrounded by thick, bright green moss and giant ferns.

I headed out that day with my new clay pot under my arm ready to conquer the world with my Alcatra. Life couldn’t have been better and little did we know that in a few weeks a virus would overtake the world.

Thanks to Antonio Câmara and his son for a memorable lesson in cooking in the tradition of the Azores. Their touring company is Pro Island Tour – proislandtour.pt

A few days later we toured the island with another guide and after dining out on another Alcatra dish our guide told us that no one in the world could cook like his grandmother. He went on to add that it was because of the love she put into it.

That was the passion and care I felt from those cooking all of the traditional foods we tasted in the Azores.

My next post will discuss briefly the interesting history of charity and sharing of Alcatra at the Holy Ghost Festivals – still popular today.