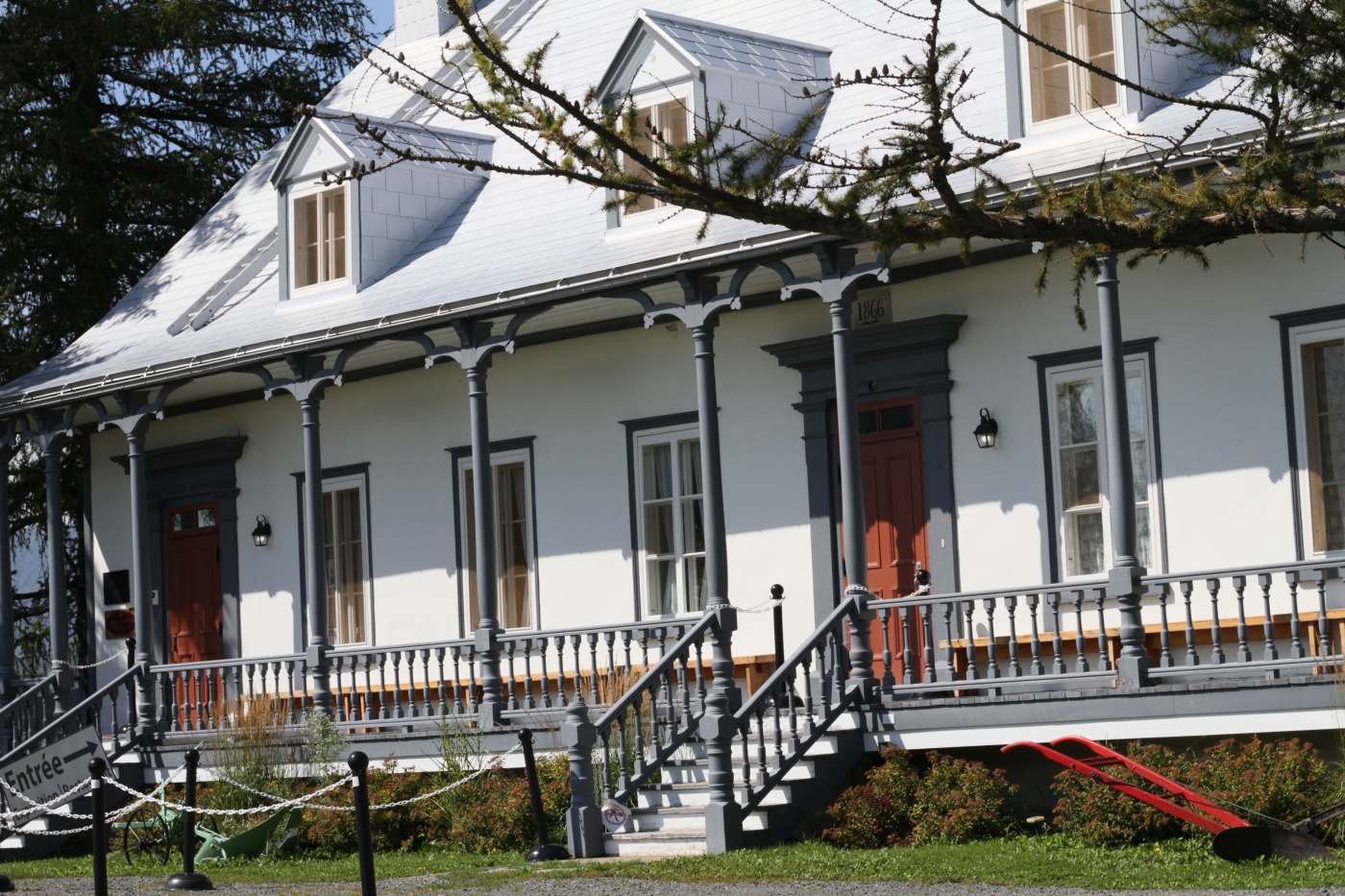 On the shores of the St. Lawrence River in Quebec, is a precious piece of land, and one that tells a story of farming culture three hundred and fifty years ago.

When the French first arrived to settle this part of New France, this area was wilderness. Francios LeVal bought a large piece of land in 1667 to establish a farm to feed those living at the seminary in Quebec City, further west up the river. This became La Grande Ferme.

Today La Grande Ferme is a historic site that shares the story of how this land was farmed in this part of La Nouvelle France.

A large manor home, now a museum and eatery remains to tell the story, through displays of archeological finds that give us a look and taste of the past.  Foundations of the original buildings remain on the property.

The large manor home housed and fed the men and women who worked on the farm.  One cook fed the workers and it is hard to imagine how hard she must have worked. The original home was burnt down by invading British in 1759, but rebuilt in 1866.  Many of the farm workers were unruly youth and two teachers were said to work at the farm to provide an education for the younger workers. Produce from the farm was taken by boat up the St. Lawrence River and then by cart to the seminary in Quebec city.

Should you be living at the seminary, you were served the best food that could be offered at the time.  Meats, fish and foul were served to the clergy, and a wide variety of vegetables were available. Residents of the seminary enjoyed the farm life and came to La Grand Ferme for a rest. The lower class workers ate more hearty, simple fare of soups and stews. Bread made up the largest part of their diet and they used their bread as a plate to hold their food.

Food eaten at that time included trout, Canada Goose, poultry, beef, pork and pigeon.  Vegetables grown on the farm included beets, leeks, peas, carrots, cabbage, cucumber, lettuce and many onions. Onions were so popular at the time that many men ate up to 400 onions a years. Bread and onions were enjoyed together. They were reported to have the strong odour of onion on their breath at all times. Potatoes were not eaten in early times but became more popular in the nineteenth century.

Passenger pigeon was popular on the table. They were so plentiful at that time that there are descriptions stating that you could point a gun to the sky and without looking, shoot, and a pigeon would fall to the ground. Of course, they were over hunted and are now extinct. Pigeon tasted similar to chicken but with a varied flavour depending on the what the birds fed on, often corn and nuts.  Pigeon was a popular dish in many places during this period in history and they were served in pies, stews and soups as well as roasted. Many recipes can be found in early Canadian cookery books using pigeon.

During the time the British held power they introduced to the French the practice of feeding root crops to the cows increasing their productivity of milk. The making of dairy products increased during that time.

The museum at La Grand Ferme demonstrates a bit of what life was like during those early days in New France. My visit was made during the Covid virus when normal activities were limited. Costumed interpretive staff  were available pre-covid to tell visitors of life in the 1700’s but the excellent displays tell the story well.  An French /English speaking guide was available and spoke with passion about the history of La Grand Ferme. The  restaurant on the premises normally serves French Canadian specialties, but during the pandemic, only take out items and local crafts are sold.

A special time in Canada’s French Canadian food history is preserved in La Grande Ferme. The following recipe was displayed in the museum housed in the manor house.