It is April, 2020 and we are making history by living in the time of the Coronavirus.

When trying to buy eggs the other day, I was shocked to find no eggs available – in four stores. Sold out!

With Google as my Cookbook, I found a recipe to make a chocolate cake with no eggs and no butter. It turned out to be one of my best chocolate cakes yet. It was a recipe used in World War 2. And that experience has reawakened my interest in wartime and depression cooking.

Dining Out With History usually focuses on historic culinary experiences discovered while travelling.

Now, the whole world is STAYING HOME. We cannot travel. Restaurants are closed. There is some fast food take out to be had, but I am hearing that interesting and aged foods are being found in the back of cupboards. So people are clearing their shelves and cooking creative foods.

We cannot compare the adversities of life in the times of war, depression and the Spanish flu pandemic to the Coronavirus.  Each is unique and there have been different challenges for each time in history.

During the time spent with the Coronavirus, there is no indication that there will be a shortage of food, at least not in our privileged countries. But we have behaved as though there will be a shortage of food. Many people have panicked, filling their grocery carts with ridiculous amounts of food that in the end may be wasted. Hoarding food has been seen everywhere, until limits have been enforced in some stores.

Food history has many tales to tell about other times that the world has experienced adversity.

During World War 2, food was rationed in Canada, the United States and Great Britain in order to be able to send enough supplies to provide for the troops.

In the beginning there was an impressive voluntary rationing campaign undertaken to encourage people to eat differently. Using less sugar, butter and coffee were encouraged and a poster campaign put in place. In a previous post, I covered the use of canned meat known as SPAM and how it was sent overseas for the soldiers. 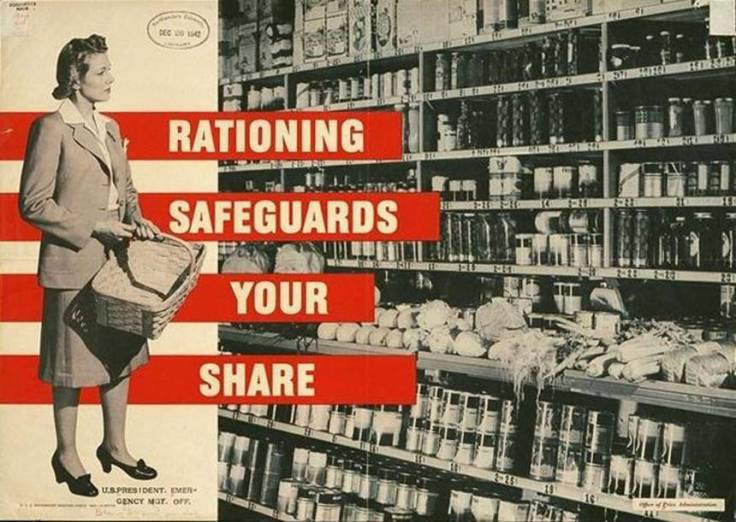 In 1942, rationing became compulsory and food restrictions were enforced through  rationing coupon books, allowing the fair distribution of certain kinds of food.

Women (and men who were not at war) had to become creative about their cooking to get the maximum amount of food using the smallest amounts of the limited ingredients.

So creative were the women of this time, that more than 200 cookbooks were published in a few short years, many by women’s church, and hospital groups and clubs. They put forth an image of women as strong and rising to the occasion to do their part – In the kitchen.

I have borrowed some virtual images of old war time recipe books from Gary Draper who has a large and  impressive collection of old Canadian recipe books.

I tried the recipe for Eggless, Butterless Cake from the Wartime Economy Cook Book put together by the Ladies Auxiliary to the Barrie Lions Club in 1942.

Give these recipes a try and taste a bit of cake that was eaten during the war.

We are fortunate during these times of Coronavirus that we still have access to all the foods we are so used to eating; food that comes from around the world and can be taken right from the grocery store shelves without a thought. Eat healthily and thoughtfully- Lest we forget.

Wait for it. The Coke Bottle Cake in the next post.