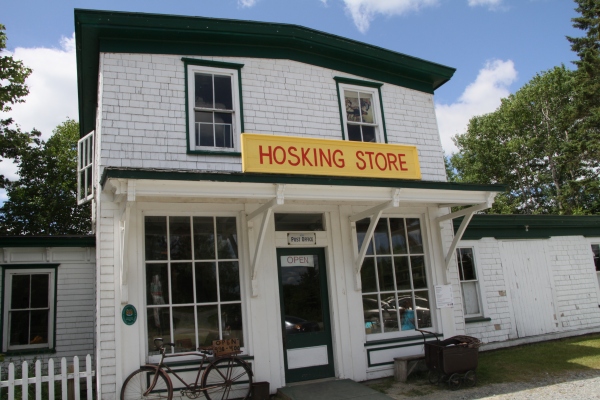 I scooped the baked beans into a bowl and spread molasses over the moist brown bread. This was going to be dining east coast style at it’s best.

From the minute I walked into the old Hosking General Store I noticed the shelves were stocked with nothing familiar. When I walked out through the back door, I was thrown back to 1940 in the community of Lake Charlotte, Nova Scotia.

Memory Lane Village was created in the year 2000 as a solution to losing important heritage buildings that were to be torn down along the eastern shore. The various buildings were relocated to one site and now show us what life was like along the coast in the 1940’s. Visitors can drop into eighteen buildings including a home, schoolhouse, church, store, prospector’s cabin and fisherman’s shed. If you are lucky enough to be there at the right time, you can enjoy a drive around the village in a 1928 Model A Ford, – a slow drive reminding us that life did not move as quickly back then.

Electricity did not arrive in Lake Charlotte until 1945, a surprising fact that caused me to pay special attention when I visited the icehouse, especially important to the community before refrigeration.

The most impressive part of the Village is that an army of 200 volunteers works to keep the village running. None of them will forget that era, because they live it and learn when they are helping with the village. And they love to visit the cookhouse for lemonade and a homemade cookie. Some of the volunteers dress in period costume. This added to the atmosphere, and it felt that ghosts of the past were with me. Special events are planned each summer with canning demonstrations, clam digging and musical events.

I dined with history in the cookhouse located in the village. There was a choice that hot summer day between a hot meal or a cold plate. 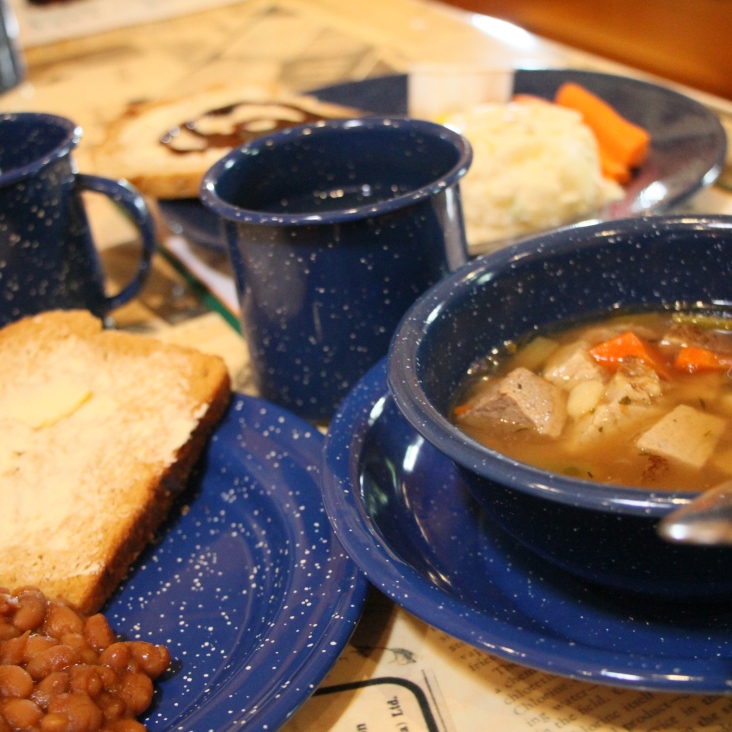 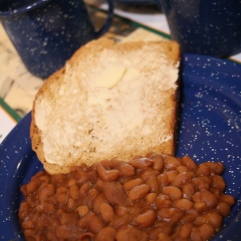 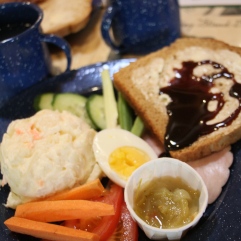 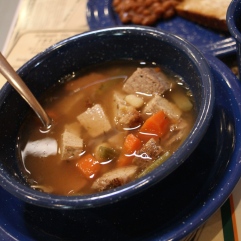 The food brought back memories of the meals that were served in my grandmother’s kitchen in Nova Scotia. These are timeless east coast meals and are still served regularly in kitchens in this part of Canada.

The hot meal began with a hearty soup, moved on to baked beans and homemade brown bread with molasses (if you choose to add molasses). The cold plate was made of salad, slice of ham, chow-chow, a hard boiled egg, tomatoes, brown bread, and of course molasses. Both meal options included cookies, gingerbread, and a rhubarb dessert with coffee or tea or lemonade. Visitors eat on benches at long tables just like the hungry lumbermen would have done. I peeked into the kitchen to see a table covered with loaves of brown bread right from the oven. Of course we scraped our plates, following the rules as posted on the walls.

To bring the buildings to life, we borrowed a tablet programmed with information and interview videos with people who lived in this area back in the forties.

In one film clip, a man who had lived and worked in the lumber camps explained that the cookhouses in that area fed and housed the lumbering crews or the gold miners who stayed in bunkhouses above the cookhouses. The baking pans were purchased from army surplus after the war.

He remembered the cook waking up at 5 am, preparing a breakfast of bacon, beans, eggs, toast, coffee and tea and having it all ready for the men at 6 am. There were rules of behaviour in the cookhouse and nobody dared break the rules – their meals depended on it. After the men ate they took their plates to the front, scraped them and put them in the pan ready to be washed.

A coastal garden demonstrates how and what food was grown in the 1940’s to feed a family. Being largely self sufficient, they depended heavily on growing and preserving food to feed themselves summer and winter. Fishing was an important part of life in this area and a clam factory shows us where workers canned clams, lobster, and herring. 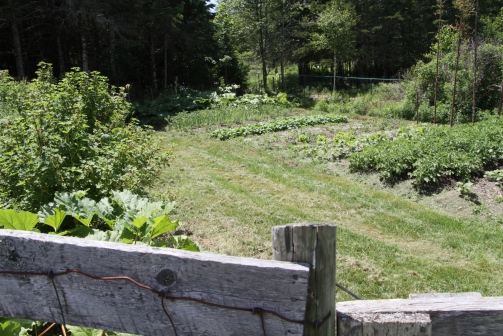 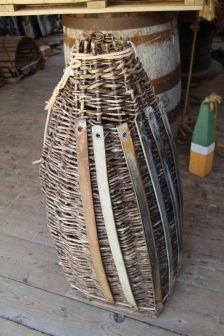 The icehouse was filled with blocks of ice stored between layers of sawdust. When a family needed ice for their icebox, big scissor-like tongs were used to move the ice.

The Webber House shows us how a home was transformed after electricity arrived in the 1940’s. I was alone in the house when I visited, but my imagination filled it with life. Fully furnished as it would have been in the forties, it felt as though the family had left the home unlocked and gone for a drive, but would be back soon. Red long johns danced on the clothesline drying quickly in the sun and wind.

I imagined Mrs. Webber would be making homemade doughnuts later that day. I am including a recipe from an American recipe book dated 1938 called:

The way to a man’s heart – The Settlement Cookbook

I left the Memory Lane Heritage Village feeling a new appreciation for the 1940’sr gold miner. It was a filling experience to eat lunch like a lumberjack. This village is a memory and a gift given by the workers and volunteers from the Lake Charlotte community in Nova Scotia. 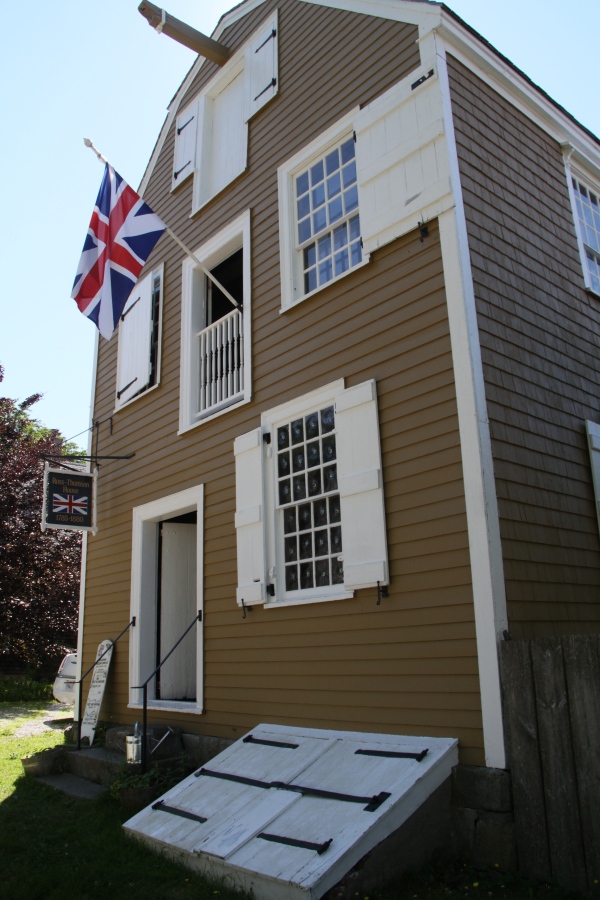 “We use every part of the dandelion here,” said Greta Mossman standing proudly beside Mya Chidiac.  They were dressed the part of women who lived in the 1700’s. The passion and knowledge Greta had for discovering the food secrets of the past was impressive.

I was visiting the Ross-Thomson House and Store Museum on a quiet street in a Shelburne where the old homes have preserved Nova Scotia’s past.

Back in 1785, George and Robert Ross escaped the American Revolution, and established their international trading business in Shelburne. They ran a store inside the large warehouse that they built to house the goods that came from the ships. They traded lumber and fish for tobacco, salt and other goods. Part of the warehouse was their home, furnished to show how their family would have lived at that time.

Back to Greta and her dandelions. I remember my father spraying and digging to get every last dandelion out of his lawn but Greta spoke of the dandelion as though it were a weed of great value. She told me of the earthy taste of dandelion root coffee, and offered me a recipe card that she had handwritten with a quill pen and ink. The petals were used to make dandelion jelly and the leaves could be used as a green for salads. Cooking back then was all done in the huge open-hearth fireplace that was surrounded with cast iron pots and pans for every function. There was a reflector oven for roasting meat in front of the fire and even a waffle iron with a long handle to reach into the coals.

In the warehouse was a display of what appeared to be ropes. Surprisingly, it was twists of tobacco leaves and Greta showed me how it was cut and sold by the inch to be smoked in clay pipes. A very large barrel in the storeroom is the oldest barrel in Nova Scotia dating back to 1760 and held 1,100 pints of port wine from Porto, Portugal. Below Murray Hagen stands by the barrel that once held port and Greta shows the ropes of tobacco. 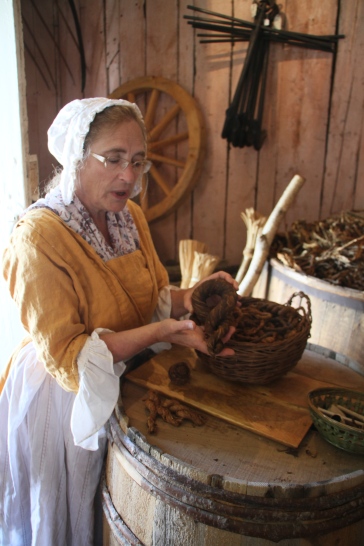 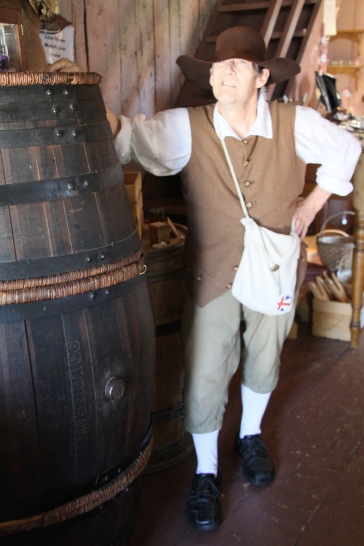 When the butter was churned in Shelburne, it would be put in a container and stored in the community well to keep it cool. Each family had their own container.

The day I visited, Greta was busy making Rose Water. She showed me the petals that had been boiled and how pink the water had become. This water was then used for cooking or preserved for using on the skin. Heating vinegar until warm and adding it to jars of the purple flowers made chive Blossom Vinegar. After storing for two weeks, the mixture was strained and the flowers discarded and aromatic vinegar remained to be added to dressings. A garden was growing beside the house to provide the family with the vegetables and herbs that they would eat fresh or preserve during the summer and fall to use during the long winters. Insect repellent was made using the herb, Lemon Balm. Those secrets of the past could be useful to avoid using the chemicals of today. 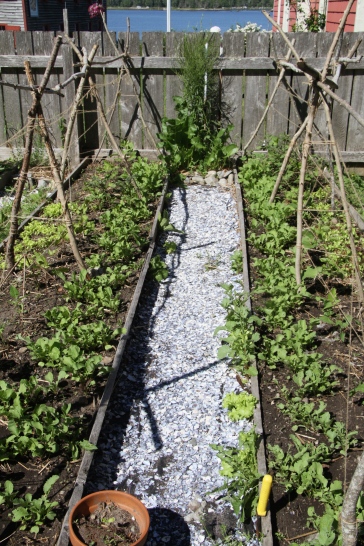 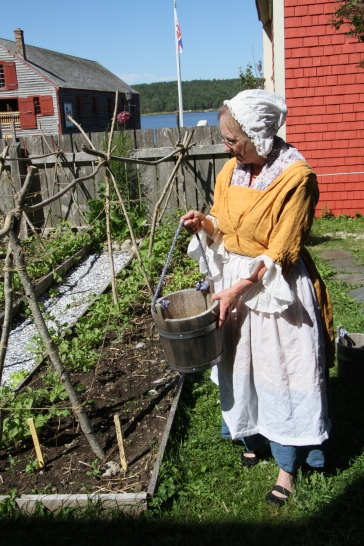 The interpreters at the Ross Thomson House always have a cooking project that opens up the kitchen door of the past to visitors and helps them to learn old culinary recipes for such tastes as mushroom ketchup, fairground lemonade and hard tack biscuits. Hard tack biscuits properly made would last a long time and were a staple of long sea voyages in the past.

When it was haying time, Switchel was made, a 1700’s version of an energy drink for the farmers working the fields.

Here is the recipe to try the next time you are out haying in the fields or alternatively mowing your grass.

Ross Thomson House puts another piece of the historic puzzle together, showing us how a merchant ran his business and home in the 1780’s, thanks to the hardworking staff who search to find creative ways to show us how it was to live back in time.