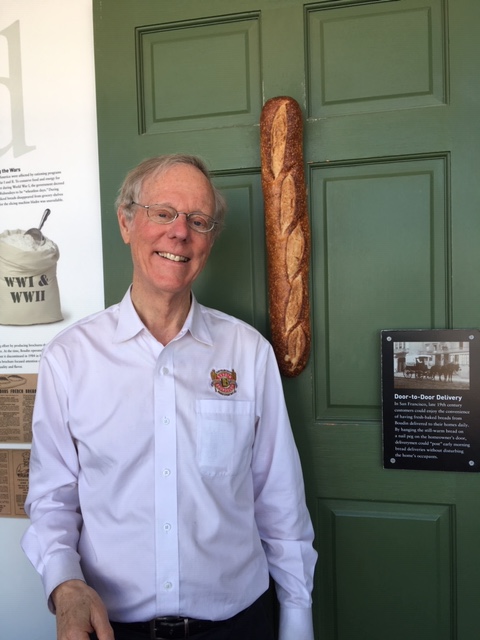 There was something very different about the taste of the sourdough bread when I took a bite of my sandwich at Boudin’s on Fisherman’s Wharf in San Francisco. And that was just the beginning of an amazing American food history story that can actually be tasted today.

When you taste the sour dough bread at Boudin’s Bakery in San Francisco, you are eating a piece of bread made with Mother Dough, (or starter) that dates back to 1849.

Don Propstra, (pictured above) who works at the Boudin Museum is a passionate and skilled storyteller. When he told me the story of the Boudin’s and their sourdough bread-it came to life.

Isidore Boudin and his wife Louis Marie emigrated to California from France arriving in 1849, back when it was a difficult journey across the oceans on large sailing vessels. Their chosen route took them around South America. As luck would have it, gold was discovered in 1848 in San Francisco, then known as Yerba Buena was then part of Mexico. It  had a population of 500 that grew into a booming gold rush town of 25,000. The couple opened their bakery on Dupont Street and began baking bread using the same recipe to make the sourdough starter they had used in France. Each day they would save one quarter of their dough as the starter for the next day’s bread. They noticed that the taste was different and could not understand the reason. The gold miners loved their bread and lined up outside the bakery door to pick up their loaf for the day, before they headed out to pan for gold.

Their son, also named Isadore, remained in France to learn to become a baker and eventually travelled to America to work at his parent’s bakery. He soon married Louise Erni and became the second generation to take over the business. By 1873 the Boudin Bakery was delivering bread by horse-drawn wagon. Customers awakened to a fresh loaf of sour dough bread hung on a nail on the front door of their homes each morning.

The third generation of Boudins had four children. When her husband died suddenly Louise Boudin took over the business. She was an accomplished business woman who was far ahead of her time.

When the earthquake of 1908 hit San Francisco, the bakery survived until the fires began. Louise Boudin saw the fire coming and put her sourdough mother in a wooden bucket and left just before the bakery burnt to the ground. She was able to rent a large barn on the other side of the Golden Gate Bridge and expanded the business. Her children eventually took over the business, making this the fifth generation of Boudins to bake sourdough bread in San Francisco. During the mid 1930’s, there was a revolution in bread making. It was the beginning of the Wonder Bread era and the bakeries could not compete with the mass-produced, highly processed bread. The Boudin Bakery was on the verge of bankruptcy until one of the bakers offered to buy the business, promising to keep using the original mother dough from 1849 and baking in the same tradition.  Now a growing chain, the Boudin name has taken on many new enterprises.

Boudin, until recently had been a family business since it’s beginning in 1849. But more importantly the bread is made from the same mother dough that was started in 1849, back in the days of the gold rush. So every bite is full of history.

Don Propstra, who was giving me my tour of the museum and bakery, told me that there are only four ingredients in the sourdough made at Boudin – flour, water, mother dough and salt. There is no milk, butter, sugar or eggs. When tested in the 1970’s to discover the composition of the bread it was learned that the wild yeast that was in the air in 1948 and something known as lactobacillus were unique to this mother dough. So unique that it was given the name of Lactobacillus San Francisco. It also explains the wonderfully sour and unusual taste of the bread.

“One crazy fact,” said Don, “is that each loaf takes three days to make.”

I believed him after he showed me the process from beginning to end looking through the glassed-in room where the bread is baked.  A huge stainless steel vault contains the precious mother dough and each day a percentage is saved for the batch to be turned into bread the next day.

The story of this bakery is a true taste of history that is celebrated in the flagship store and museum on Fisherman’s wharf in San Francisco. Even the paper bag used to package the bread celebrates the history with the story printed on the bag. The last sentence reads:

“Today, we bake a slice of history into every loaf of our Sourdough, starting each day’s bread with a portion of the original Gold Rush mother dough, which has been divided and replenished with flour and water each day for over 150 years.”

And… The bread is delicious.

One thought on “Boudin Bakery Sourdough in San Francisco”