When we pulled in to Joe’s Café in the small Newfoundland town of Codroy, I did not expect another Canadian food history adventure. The name Codroy sounded intriguing so it was our chosen lunch stop. Joe’s was attached to a small gas station and the lights were romantically low when we entered, except that it was high noon. A table of five local men sat chewing the fat, (conversing while eating their food). And that got me to thinking about how sharing food with others has been important throughout the ages. But to our surprise we could not share food at Joe’s Café that day, because when the server came to our table she informed us that the power was out and they couldn’t cook any food. We thought, “Oh well, it would come back on in a few minutes”. Our server  noticed that we lingered and in a kindly but firm voice she said, “May be awhile.” We walked out past the group of local old guys who spoke kindly to us and one man piped up,“Will still be here when you gets back”. Then I knew we had to come back. I noticed on the menu board on the way out the door that Jiggs Dinner was served on Thursdays. And this got me to wondering….

Jiggs Dinner, also known as Newfoundland Pot Day or Boiled Dinner is a well know traditional outport dish usually served on Sunday, Tuesday or Thursday. For the life of me, I cannot find out why those are the chosen days to serve that dinner. Jiggs Dinner is said to be named after a comic character in the series “Bringing up father” dating back to the early 1900’s. This meal would have been commonly cooked long before the name Jiggs was granted.

We only ate out a few times while in Newfoundland, once to dine on fish cakes and the other cod’s tongues and cheeks. The rest of the time I was busy cooking historic dishes from my camper van, so in the end we didn’t have a chance to try a Jiggs Dinner in Newfoundland.

After arriving back in Nova Scotia, I decided to try a Jiggs Dinner in my old pot over the fire. Preparations for the meal started four days earlier, when I made my own corned beef from a recipe in the acclaimed cookbook, Out of Old Nova Scotia Kitchens, by Marie Nightingale. Her cookbook brilliantly covers the history of East Coast cookery. I started with a rump roast of beef about two inches thick, put it in a brine of pickling salt, pickling spices, garlic, and sugar, weighed it down and put the pot in the refrigerator for four days. This turned the beef into corned beef with no trace of corn. When the day came to make my Jiggs, I peeled and cut the traditional vegetables – cabbage, pieces of turnip, carrot, onion and potatoes. The now “corned” beef was cooked in some clear water to remove some of the saltiness. After half an hour of boiling, the meat was added to the old cast iron pot with water, and the cooking continued over the fire. Later, I added the vegetables. There is no fancy recipe or timing here, just by guess and by golly. Awhile later, I took all of the ingredients out and served them on a platter to my well-loved cousins. And it was tasty! This dish is reminiscent of the Caldera, a one- pot meal I  tasted in the Azores that was put in a pot and cooked in the ground under hot volcanic sand, (see previous article called Azorean Caldera Cooking). One-pot meals have been practical and popular family meals that have stood the test of time in many countries and cultures.

But back to Joe’s Diner in Codroy. I reflected on how amazing it was that amidst the hamburgers and French fries, the Jiggs Dinner is still served at a small local diner every Thursday.

It was not a Thursday when we pulled into Joe’s on our way back to the ferry to sail away from Newfoundland, but I had to drive to Codroy, see if the group of five local men were in fact “still bein’ there when we got back”. I found only one man sitting at the counter in his coveralls. Not eating, just chewing the fat.

He looked me in the eyes and said, “I’ve seen you before.”

“Were you here a week ago with four other men?” I asked.

“ I’m here every day,” he said. At least one of them was there to greet us when we came back. 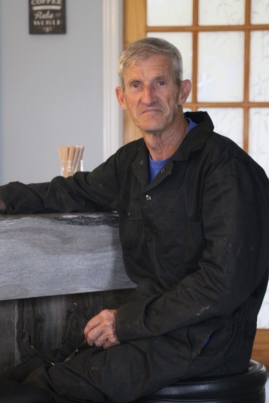 No Jiggs Dinner on the menu that day, so we ordered hamburgers and pie for dessert.

Out from the kitchen came Ann Martin, looking very hot and tired in her stocking feet with our hamburgers.

She placed them on the table, plunked herself down on a chair at the next table and started talking as if we were in her very own kitchen. We didn’t get to try the Jiggs I was wishing for, but our lunch came with a good serving of Newfoundland friendliness. She spoke sadly of the young people leaving for the cities and told us that there was a whole aisle of dog paraphernalia at the grocery store, but good luck finding a box of Pampers diapers. No babies anymore. 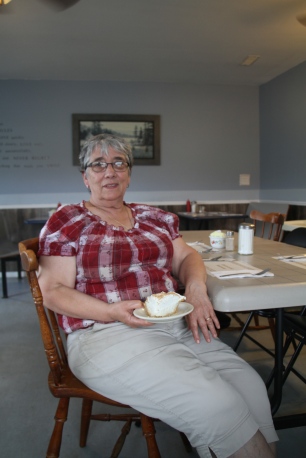 Ann Taylor – a great cook at Joe’s who makes you feel like you are in her kitchen.

“My Gentle God,” she said, when I asked if I could take her picture. I didn’t want to forget her for now she was our friend in Newfoundland and the food tasted better knowing she had made it and served it up with a good dose of “chewing the fat”.