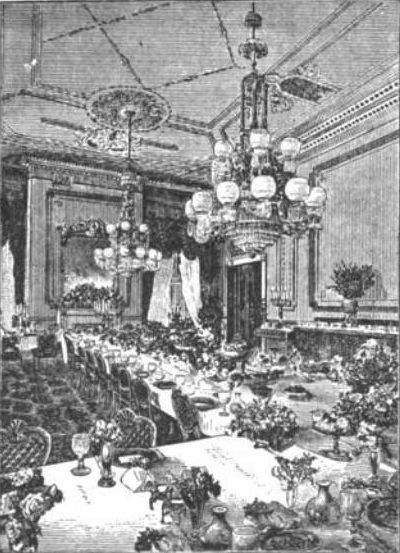 Strangely enough, the meal on the trays of the inmates at the Alcatraz prison in California and on the grand tables of the Presidents of the United States historically contained many of the same main dishes. The food traditions of Thanksgiving have remained basically the same for the past two hundred years, with regional differences, on many tables across North America. It is common to cook turkey with dressing, potatoes, root vegetables, and pumpkin pie as part of the Thanksgiving meal.

History.com defines the widely accepted beginnings of the celebration of Thanksgiving. “In 1621, The Plymouth colonists and Wampanoag Indians shared an autumn harvest feast that is acknowledged today as one of the first Thanksgiving celebrations in the colonies. For more than two centuries, days of thanksgiving were celebrated by individual colonies and states.”

It is a strong tradition wherever you are in America to have a fine meal on Thanksgiving to show appreciation for the harvest or just to celebrate the holiday.

Alcatraz was a maximum security prison built on an rocky island off the coast of San Francisco. From 1934 to 1963, 250 prisoners at a time were held within this penitentiary. Alcatraz is now a National Historic Site visited by thousands of visitors a year. The dining room is now an empty space full of silent memories of the Thanksgivings shared by inmates.

The prisoners on Alcatraz ate Thanksgiving dinner on their metal trays, in the dining room, and white sheets were repurposed as table cloths. A prisoner was considered to be fortunate to have a job in the kitchen assisting the cooks and much of the kitchen staff was comprised of prisoners. The cutlery was humble and counted, lest it be stolen as a weapon and especially the knives were watched closely in both the kitchen and in the dining room.

Men being punished for their disruptive behaviour while in the prison were held in solitary confinement, for a maximum of 19 days and the restricted diet was part of the punishment. The cells were dark and meals were served three times a day through a small window and eaten in the cell. A typical dinner was served at noon that consisted of ½ bowl of soup, 1 bowl of tea and four slices of bread. However, even in “solitary”, Thanksgiving was celebrated, as illustrated by the noon dinner served on Thanksgiving Day, November 28,1946 to the prisoners in solitary confinement.

A Thanksgiving menu from The White House Cook Book by Mrs.F.L.Gillette and Hugo Ziemann dated 1877

In the White House the presidents and their families have always dined on fine historic china, with the best linens and silverware on the table. The tables and chairs were built of the best wood and skilled chefs cooked their meals. Service was formal and servants would have brought each course separately to the table. Here is a sample menu from a Thanksgiving feast at the White House, prior to 1877.

Both Presidents and prisoners have enjoyed their annual Thanksgiving dinner for many years and it is almost certain that each person had memories of their childhood festivities however grand or humble.