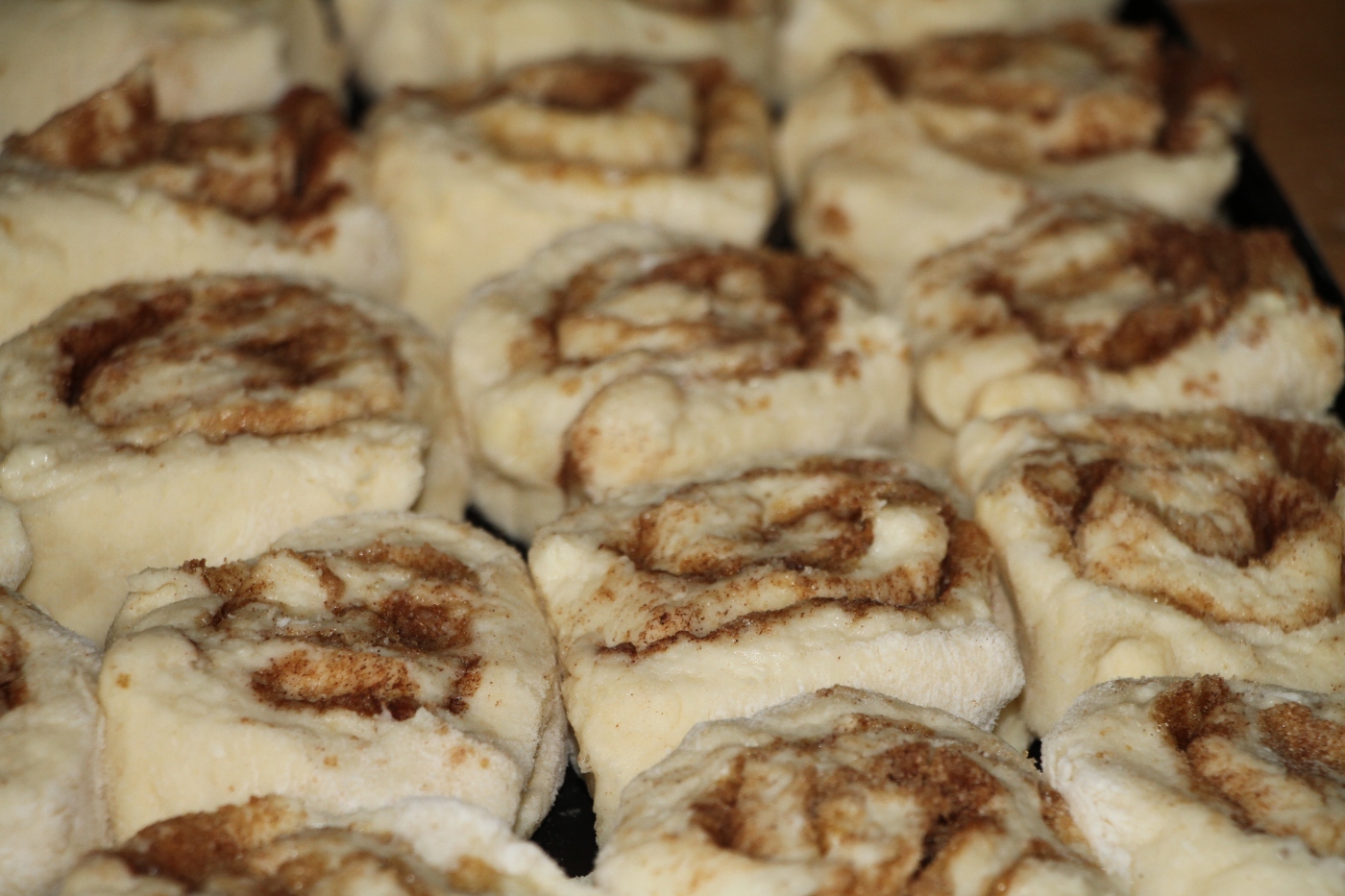 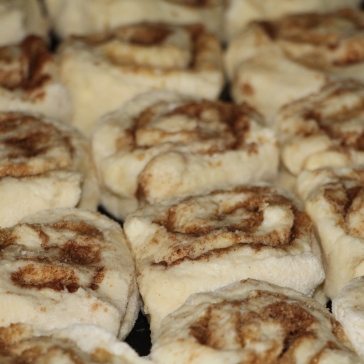 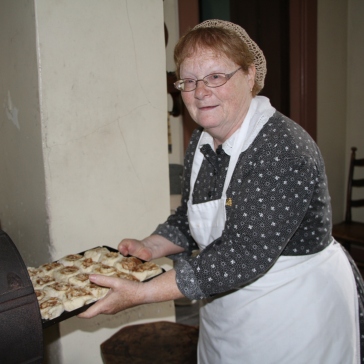 I was visiting Historic Sherbrooke Village in Nova Scotia to experience tastes of the past, so imagine my surprise when I was led to the town jailhouse for a cooking experience.

We walked from the Sherbrooke, Nova Scotia of today and into yesteryear almost without noticing. Part of the village has been spared modernization and Historic Sherbrooke Village has been created. Man has lived on this land along the St. Mary’s River since our Mi’kmaq nation; and was also settled by the French and eventually by the English who named the town Sherbrooke in 1815.

In 1969, the Sherbrooke Village restoration project and part of the village was preserved to give us all the privilege of visiting the town as though it were the 1860’s.  Those were the days of sailing ships trading between Britain and the West Indies as well as farming, fishing, cutting and milling timber. In 1861, a gold rush hit the area and the opening of 19 mining companies caused a boom.

There are 80 buildings in the historic part of the village, with 25 open to visitors. It takes little imagination to return to history, as the costumed visitors and interpretive staff bring the village to life. The Hands on History program allows visitors of all ages to wear clothing like those of the 1860’s while visiting Sherbrooke. Hundreds of costumes are available in all sizes to be worn by the visitors. The class system was very much evident in the clothing style differences.

“It feels different, the minute you put the big hooped dress on,” said one visitor participating in the program. As I put on my costume, I immediately stepped into history.

Visitors can explore the blacksmith and printing shop, drug store, clothier, pottery studio, general store, woodworking shop and even an Ambrotype photography studio. Farm animals, gardens and the sawmill help us to learn about how the townsfolk  provided for each other.

AND NOW FOR THE FOOD

Karen Pye played the part of the jailer’s wife the day I visited the jailhouse in my big hooped skirt. She was busy cooking cinnamon buns and taught me about the jailer’s family and the interesting house that was used as a jail in Sherbrooke until 1968. From the outside the large, frame house looked like any other. Some bedrooms were turned into cells, barred windows and all, but the family lived in the same house as the prisoners. Many of those spending time behind bars were mischief makers who had ridden their horses through the town or were found drunk in the ditch. This was a Temperance town and alcohol use was not looked upon kindly. The jailer was paid a meagre salary so earned extra cash by working at the saw mill, gold mine or lumber camp. As well as cooking for the prisoners and her family, the jailer’s wife would sew to earn an extra income. The family and prisoners ate the same food prepared in the kitchen by the jailer’s wife.

The jailer’s diet back in the 1860’s consisted of such food as bread, stews, fish, soups, hodge podge (a mixture of garden vegetables cooked with cream) and cooked garden vegetables.  Sugar and molasses cookies, ginger cake and occasionally cinnamon buns are examples of the sweets served at the jailer’s home. Of course, preserves were made to allow fruit and vegetables to be used year round. 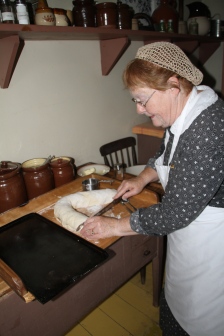 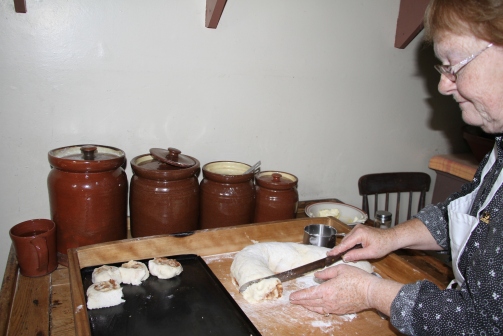 Karen whipped up the cinammon buns with the ease of an expert. As she mixed, she recited the amounts, although I know the jailer’s wife of the past was using tea cups to measure and could do it with her eyes closed.

“Measure 4 cups of flour, and mix in 2/3 of a cup of shortening with two knives,” Karen told me while demonstrating. She added a dash of salt, 2 fresh eggs and 1 cup of buttermilk, beating until  the dough was smooth.  Of course the cast iron wood stove was heating all the while. The jailer’s wife would have been proud of her stove.

When all of the ingredients were beaten to a smooth consistency, she would pat the dough into a square and use her rolling pin to even the top. She covered the whole surface with butter that she had churned the day before, sprinkled the surface with brown sugar and topped it all with cinnamon. Karen then rolled the dough up lengthwise and ended up with a long roll. She carefully cut pieces and placed each one on a baking sheet.

“How do you know the temperature of the oven?” I asked her. She told me that she would put her hand inside the oven and if she could hold it there and count slowly to seven it would be the right temperature for cinnamon buns. A slightly lower temperature was used for bread and she could regulate the temperature by opening the oven door a crack.

While the buns were spreading their irresistible odour throughout the house, we greeted visitors with Scotch cakes. Later Karen was busy making butter. She explained that the once the milk and cream were separated, the cream was skimmed off the top and put in a butter churner. Family members often took turns beating the cream to butter with the wooden paddle that was pushed up and down.

Not a bad deal being a lawbreaker in the 1860’s with tastes that came from that kitchen.

After all the work at the jailhouse, I went down to the Sherbrooke Village Tea Room for a lunch reminiscent of the meals that would have been served in the past. Fish cakes, baked beans, home baked bread, gingerbread, and many more traditional dishes were served. Afternoon tea is also served in the tea room. Although the eatery is now modernized inside, an old photo shows that building was once a hotel and restaurant and it looked much the same in days of old. To bring the tastes home to cook in my kitchen, I picked up a collection of hand printed recipes held together by a string. The print shop on site prints each page by hand and they are sold at the gift shop.

Nova Scotia’s Historic Sherbrooke remains as a living piece of history – a gift so we will all remember how much work went into cooking and living in the past. 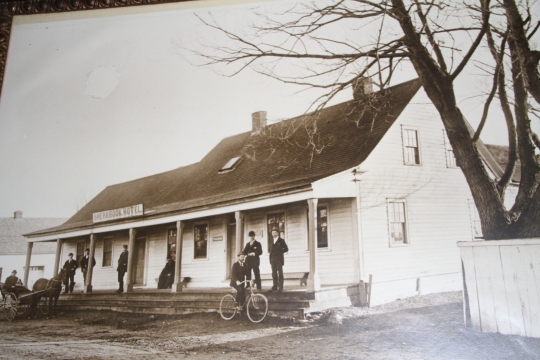