Lori, my friend, brought out her cast iron cookie mould. She was proud to own this and carries on the tradition of making these special Swiss treats each Christmas to share with her family. This very heavy cooking pan was originally made in Switzerland, travelled to Canada and had been passed down to her from her Swiss mother-in-law. I had visions of this mould being used over a wood stove on a snowy night in a small village in Switzerland. And children waiting to eat the results as quickly as they came out of the mould.

These delicate thin biscuits are made from a dough that is baked on a stove top in a cast iron press. When they are cooked to just the right temperature on each side, the biscuits emerge from the press with delicate designs imprinted on the surface. The taste is just as delicate.

After some research, I learned that this style of making cookies has many names. In Switzerland, they are called Bratzelli, Bratzil, Bretzel, Brezel or in this case, Bern Cracknels. They are similar in appearance to an Italian wafer cookie called a pizzelle, also with several spellings. Pizzelle is made with a batter, but Bratzelli is made with a dough. According to my reading, many cultures have used this method for making the delicate biscuits and adapted it in their own way. In Scandinavian countries, they are known as Lukken.

In modern times, electric presses have been designed to make the cooking easier, but we were privileged to use an old, elegant press from Switzerland that made the experience come to life. It took us awhile to learn the art of timing and when to flip the mould but one we had learned we had mastered a new skill from the past.

Here is the recipe we used to make our Cracknels, also known as Bratzelli.

The dough is formed into balls and placed in the centre of each design and the mould  is closed. After a short time, the mould is turned over on the burner. 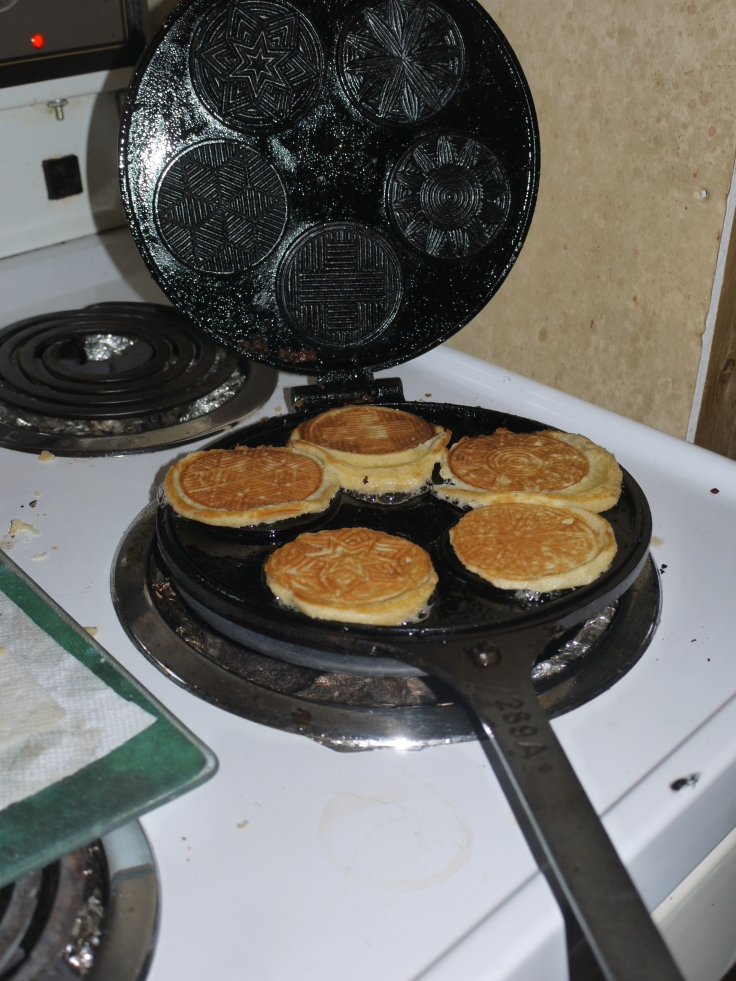 The mould is opened to reveal the golden brown biscuits which are lifted and placed on a flat surface. The cracknels quickly become crispy.

This was a wonderful experience of cooking a Swiss delicacy on a mould full of history that has travelled all the way to Canada.