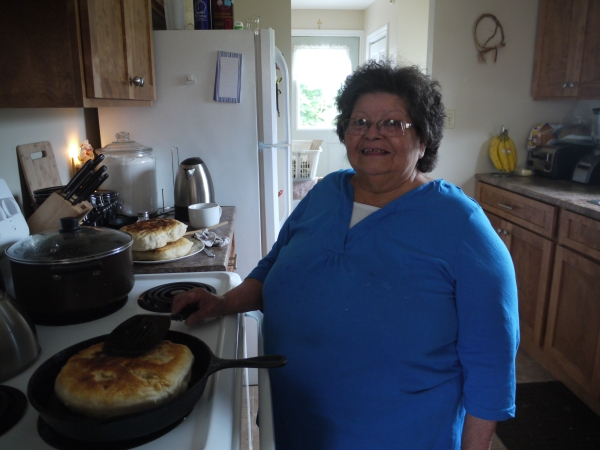 As I walked into Kathy’s kitchen, she was making a huge loaf of Fry Bread in a pan on the stove. Her smile was inviting and I knew I was in for a good time.

I am learning that Dining Out With History stories can be found around any corner. While visiting Roma – a Canadian National Historic site on Prince Edward Island, I came across a festival and met Tamara Sock dressed in her Mi’kmaq dancing regalia. After taking her photo, we chatted about my blog and she said:

“You should meet my mother.”

It turns out that her mother, Kathy Archer, is a well respected elder of the Mi’kmaq peoples and that she has compiled a collection of recipes passed down by her mother and grandmother and that she remembers from her childhood.

“Everything was passed down verbally,” Kathy told me. And there were no exact measurements for ingredients, so it was hard for her to come up with written recipes. But she has a precious, tattered old notebook of her memories and has written them as recipes.

“That needs to be a book,” I told Kathy. She knows, but is a very busy woman. Kathy is an activist and has lots to say about any topic about which she is knowledgeable.

She is a survivor of the Shubenacadie residential school system and was taken from her parents at 10 years of age to live at a school, far from her family, where she was abused, physically, mentally and sexually as a child. As a result of that experience, she has fought for her First Nations rights all her life and has become a strong and influential woman. She travels to Ottawa in her role as an Elder and at a proud seventy years of age, continues to work tirelessly with a program to help survivors of the residential school system.

Kathy shared a dinner of Fry Bread and a type of meat and potato hash or stew. She shared memories and could remember cooking clams by the fire, and just setting the shells on hot rocks to open.

She also shared the old recipes with me. There were lots of recipes for cooking game, bannock, fish, and other foods interspersed with recipes that my Nova Scotian grandmother used to make. Food idea sharing has always happened between women of all cultures.

It was the Mi’kmaq who saved the first French settlers from starvation by helping them to learn to eat what was around them.

It was an honour to meet Kathy and her family and to share a meal made with lots of love from a woman who has been through so much, but survived to become an inspiration to all. She has so much to share.

Kathy, you need to publish and share your food ideas … when you get a minute.

Luskinikn Baked in Sand – A traditional recipe for a Baked Bread

As recorded by Kathy Archer

I’ll try that one Kathy, thanks so much for passing on some Mi’kmaq cooking traditions. 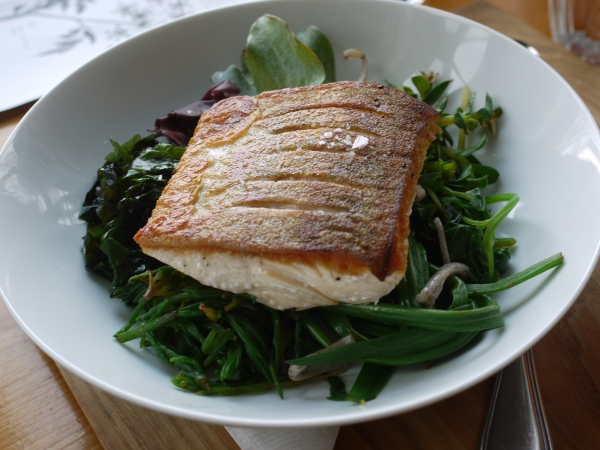 On my plate was a piece of copper coloured fish, resting on a bed of seven kinds of sea greens. I had probably walked on the those very same plants across the road on the wide red sandy beach that stretched on forever in a half moon shape around the bay.

Along the Bay of Fundy coast in Nova Scotia, Canada, where high red cliffs rise above a rocky coast, often covered in a blanket of fog, is the small town of Advocate. Cape Chignecto stretches beyond that in a big roadless point, inviting walkers to discover. Surrounded by dramatic scenery, the few homes that remain have stood strong against the elements and there is a pride about living in this majestic corner of the world.

We were here to hike Cape Chignecto and dine at the Wild Caraway Restaurant and Café. I sought out this dining experience because it is well known that the owners Sarah Griebel and Andrew Aitken include foraged foods on their menu.

Foraging is a becoming trendy with the chefs of the East Coast, all across Canada and in many other countries. Trendy…. but not new.

In this province harvesting and using wild foods was how the Mi’kmaq included greens and fruit in their diet long before Europeans set foot on this country.

In Out of Old Nova Scotia Kitchens, Marie Nightingale wrote this information about the Mi’kmaq diet from her research.

“For vegetables, there were the wild potato and wild carrot as well as other roots and plants which grew in the forests. The Indian Pear, or Service Berry, was eaten fresh, while blueberries, huckleberries and cranberries were boiled and shaped into little cakes which were dried in the sun.”

In the Wild Caraway Restaurant and Café, history surrounds. It is situated in one of the old homes of Advocate, dating back to the 1860’s. It has been adapted to life as an eatery while maintaining the character of the past. Old furniture, and a big bookshelf full of cookbooks, creates a cozy feeling and out the windows are views of the sea.

But the menu and food are what attracts diners from far and wide. Much of the menu reflects an appetite for adventure, with surprise tastes of the earth that are not served in other restaurants. Steak and home cut fries and fish and home cut chips are served as well for those who prefer “the known” on their plates.

Sarah and Andrew and others knowledgeable about wild edibles get out there themselves and forage for foods to add to their menu. They are constantly learning. The menu is always changing, Sarah claims, because they are easily bored and love to add new tastes to their menu.

Sarah grew up in Alberta and Australia.

“Foraging harks back to ages ago,” she said as she reminisced picking wild mushrooms in Australia.

“Andrew’s Mom made her own ginger beer,” she added. They have included homemade ginger beer on their menu, an ode to the old Nova Scotia tradition. And the pickled herring they serve follows a recipe from Out of Old Nova Scotia Kitchens.

I ordered: “Crisp skin Arctic Char, homemade soba noodles, foraged sea greens, smoked char consommé” When my meal arrived, Sarah took the time to tell me what each sea green was named. Crowsfoot, Sea Blight, Sea Lettuce, Oyster Leaf, Sea Purse, Auric and Goosegrass. I was excited to try the tastes and they were unlike anything I had tasted before; fresh and unique. Sarah said that one older customer commented that the greens brought back memories of his mother serving sea greens.

Both dishes were a taste of wild heaven. Among the other specialties that used the wild, was a dessert: chocolate, date and coconut cake, rose ice cream, elderflower and lemon marmalade. On the Beverage list was: Homemade Elderflower Soda, Homemade Rhubarb Soda, and Homemade Ginger Bear along with the more usual drinks.

On the Wild Caraway menu is a botanical drawing of a Caraway plant after which the restaurant is named. It reads:

Wild caraway grows everywhere around the landscape of Cape Chignecto, where this special restaurant feeds us delicious and surprising foods that are there for the picking. Taking us back to age-old traditions and giving us a taste of the past.

Thanks Sarah and Andrew for the dining journey……