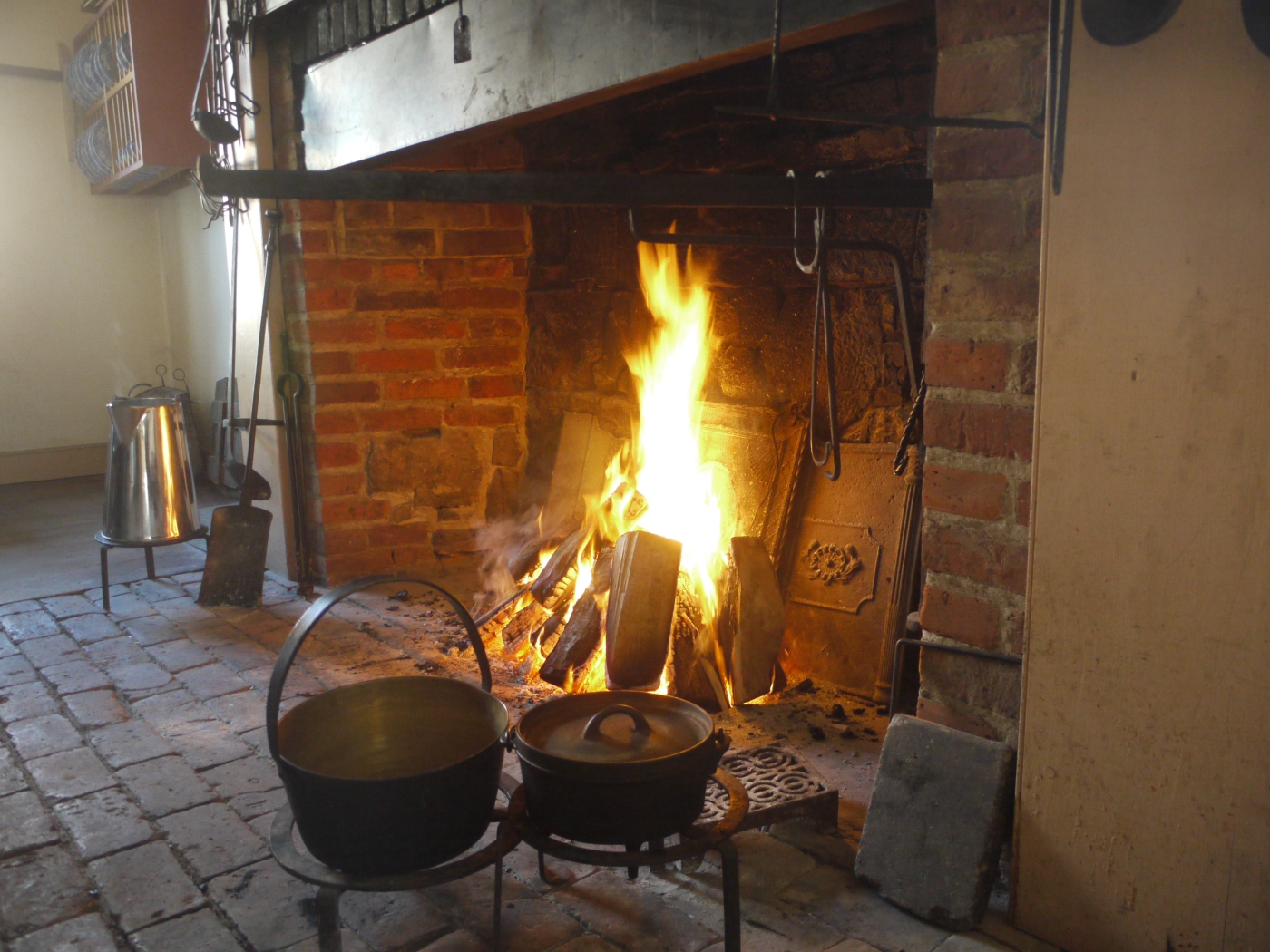 “If you are on fire… YELL,” Briget Wranich told our class. She was dressed in a long dress, as a Fort York cook. Our class of six stood in front of a raging open hearth fire – 500 degrees hot, we were told, wondering how we would cook and eat five meat and poultry dishes in the next few hours. We were taking The Roasted Meats and Made Dishes course at Fort York in Toronto, Ontario.  It is one of the monthly classes in the Historic Cooking Class series given at the Fort. Our course would be given in the Officer’s Mess Dinner Kitchen,an original building at Fort York dating back to the early 1800’s.

The senior officers enjoyed the high life at Fort York. They were required to pay dues from their monthly pay towards the Officers mess where they ate meals and a formal three-course dinner daily and often entertained guests from the nearby town of York (now Toronto.) On special occasions, the meals were even more elaborate and included many courses. The cooks were women from York and wives of the soldiers. After a day in the kitchen I began to realize how hard their daily work was. The foot soldiers that lived and worked at the Fort were given rations and cooked and ate together, often combining their food. Here is a soldier’s daily ration: 1 ½ lb. of soldier’s bread (a coarse bread made with whole grain flours) 1 lb. of meat – often a boney, fatty piece of meat rice dried split peas 1 pint of ale They boiled their meats to make stews and soups to stretch the food. Eight soldiers might combine 8 lbs. of meat into a stew giving them a hearty meal, much more food than they might have had in England. The officers were fed like aristocracy and enjoyed roasted and grilled meats. The left over pieces would be used to make curries, fricassees and ragouts.  They had delicious side dishes and desserts.

We cooked a large Roast Beef in what is known as a Tin Kitchen, an open metal reflector oven on legs that was placed in front of the very hot (500 degree) open fire.  John Hammond, an expert meat roaster who was teaching us that day, showed us how to carefully place the spits through the roast to enable it to be turned to cook it evenly on all sides.  He placed the Tin Kitchen in front of the fire and checked on progress periodically, basting it with drippings.

Our next adventure was Chicken Curry, the dish we would have with rice and salad for lunch. That was a surprise as we often think of curry as an East Indian dish. We were reminded that the British settled India and curries became very popular at that time.Rice was grown in the Carolinas and brought north. We used a recipe from A New System of Domestic Cookery by Mrs. Maria Rundell, a book dating from 1806.The chicken curry was a spicy blend of meat and sauce.popular curry mixture used at that time was Dr. Kitchener’s Curry Powder. Here is how to mix a large jar full for future use. 12 tbsp. Tumeric, 5 tbsp. Cardamom 10 tbsp.  Coriander ,5 tbsp. Cinnamon, 5 tbsp. Black Pepper , 1 tbsp. Cumin,5 tbsp. Ginger.

Our next dish was To Roast a Fowl with Chestnuts from The Art of Cookery Made Plain and Easy by Hannah Glass written in 1796. This lesson caught my interest because the chicken would be hung on a string in front of the open-hearth fire. We made the stuffing from a combination of chestnuts, chicken livers, bacon, parsley, sage, rosemary, thyme, mace, pepper, salt and nutmeg. The livers and bacon were boiled and then we used a mortar and pestle to blend the chestnuts, liver, and bacon with the parsley and other herbs and spices.  We stuffed this into the chicken and John demonstrated how to use metal skewers and cotton string to wrap the chicken into a package that could be hung on a nail in front of the fire. He wound it up and, voila, the chicken turned, roasting gradually over the fire. When cooked, it was beautifully golden and the stuffing was divine. (See recipe section)

The Pork Pie was made using a pastry put in a clay dish and by layering pork, onions and apples and adding spices. We cooked this in a wood fired oven, always a tricky affair, as it is difficult to maintain heat at an even temperature.  To guess the temperature, John bravely put his arm in the oven and counted. If he could stand the heat counting to 8, the oven would be close to 350 degrees. Our pork pie had an overly cooked top that day, but tasted delicious, and taught us the challenges of baking dishes in a wood fired oven.

The Lamb Chops were breaded with crumbs, cooked in a pan over coals.  The Robart sauce was popular at that time and we used a recipe from A New System of Domestic Cookery by Maria Rundell dating from 1806. The ingredients in the sauce were butter, onions, flour, gravy, salt and pepper, mustard, vinegar and onion. This sauce was poured around the chops and a garnish was added.   During a tour of the officer’s building, we visited their dining room. The table was set perfectly with fine china. “How grand to dine at a table this fine every day,” I thought. We headed back to the kitchen to enjoy the food we had cooked. The volunteers had also added a ragout of roots. Dinner rolls to accompany our meal were baked by volunteer Sherry Murphy, who is an expert at cooking bread in wood fired ovens. It felt quite grand to be dining on meats, and poultry as cooked for the British officers of Fort York. Leaving that day, I walked through the Fort glancing ahead at the skyscrapers of Toronto, planning to dine like an officer soon – in my kitchen. To learn more about the cooking classes at Fort York in Toronto, Ontario: http://www.fortyork.ca/news-a-events/events/199-historical-cooking-classes-in-the-officers-mess-kitchen-from-the-kitchen-garden-two-seasonally-themed-summer-classes.html