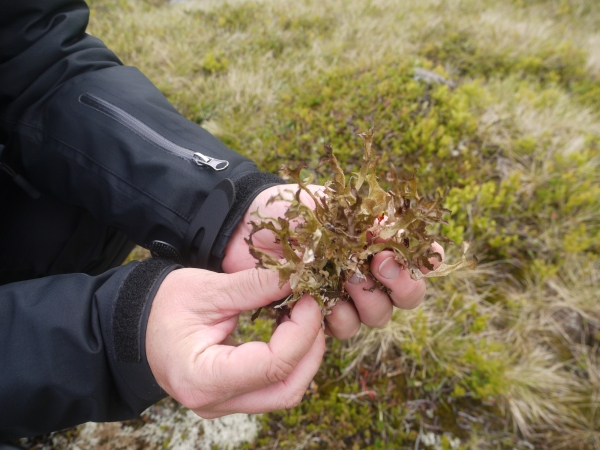 In the kitchen of the old doctor’s house on a remote Icelandic coast, there was a mystery cooking on the stove. Outside the wind was wild, it was trying to snow and we were driven from our campsite into the only place to stay on this part of the peninsula. That was no hardship as we huddled around the stove drinking coffee and eating Icelandic pancakes in what, at one time, was the home of the doctor in the settlement of Hesteyri. Once a whaling station and later a fishery on the far north west Hornstrandir peninsula of Iceland, Hesteyri now consists of seven lonely homes on a roadless coast.
But the mystery on the stove had my attention. Birna Pálsdottir the 80-year-old owner of the inn, was cooking a mixture of what looked to be a grey plant and milk. When I later asked her about the historic recipes of Iceland, she shared with me she had been cooking Icelandic Moss porridge. It is traditional to cook the moss with milk, brown or white sugar and a pinch of salt (see recipe section of blog for amounts.)
Icelandic moss can also be ground into flour and used in bread. (see recipe section of blog.)
To use the moss, it is washed to clean the soil and other dirt from the moss, laid out to dry and can be stored for future use.
When it is time to cook with the moss it can be rewashed and used as needed.

We had been hiking in Iceland for several days and had managed some adventures. One day we left on a day trip with warm clothes and some snacks. Due to unforeseen circumstances and bad weather we overnighted in an empty fisherman’s cabin and returned the next day. Little did we know at the time, that all around us on the ground was nutritious food. We saw what we thought was blueberries and later learned we could have had our fill. There were also small dark berries called cloudberries. Claudia Schiller, a woman from Germany who has worked at the inn for many summers offered to take me on a walk in the hills to look for Icelandic moss, Arctic fox and best of all, fairies. When I began to look at the ground, I noticed the many colours of the flowers, plants, and rocks. Claudia pointed out the Icelandic Moss, a brown, soft mass that pulls easily from the ground in handfuls and we picked bags of the moss to take home.
Icelandic moss is actually lichen and grows in other countries in the European north, but because it is prone to retaining pollutants, it is not used for cooking everywhere. With the lack of pollution in Iceland, it is used for making cosmetics, flavouring Icelandic moss schnapps, and in food.
Highly nutritious, Icelandic moss has also been used medicinally in Iceland for centuries to treat coughs, stomach ailments and as a treatment for cancer.
A cookbook entitled Delicious Iceland by Chef Völundur Snær Völundarson highlights the Icelandic food traditions and includes a recipe for Iceland Moss Curds, a soup made with Icelandic moss with milk curds.
Turns out that below our boots, we were hiking on an Icelandic delicacy.
If we are aware, food is all around us in nature, not just on the grocery store shelves. That is a lesson our ancestors are still trying to teach us.