After learning how to cook over the open hearth at King’s Landing and spending the summer restoring an family heirloom copper plated cauldron, I was ready to do my own cooking over fire. I used a  recipe for Irish Stew from OUT OF OLD NOVA SCOTIA KITCHENS, by Marie Nightingale. I used a recipe to mix dough for the  biscuits from  King’s Landing.   We then built a fire pit and cooked dinner.  Here are the photos of the dinner cooking.  The stew was out of this world.

My biscuit technique needs work as I put them directly into a cast iron dutch oven and should have put them into another pan inside the dutch oven. I then put hot ashes under and on top of the lid. 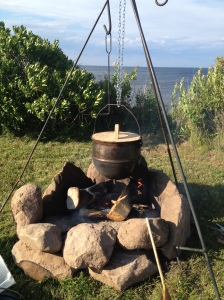 Soda Biscuits (a recipe from the Morehouse House in King’s Landing, New Brunswick)