After learning how to cook over the open hearth at King’s Landing and spending the summer restoring an family heirloom copper plated cauldron, I was ready to do my own cooking over fire. I used a  recipe for Irish Stew from OUT OF OLD NOVA SCOTIA KITCHENS, by Marie Nightingale. I used a recipe to mix dough for the  biscuits from  King’s Landing.   We then built a fire pit and cooked dinner.  Here are the photos of the dinner cooking.  The stew was out of this world.

My biscuit technique needs work as I put them directly into a cast iron dutch oven and should have put them into another pan inside the dutch oven. I then put hot ashes under and on top of the lid.

Soda Biscuits (a recipe from the Morehouse House in King’s Landing, New Brunswick) 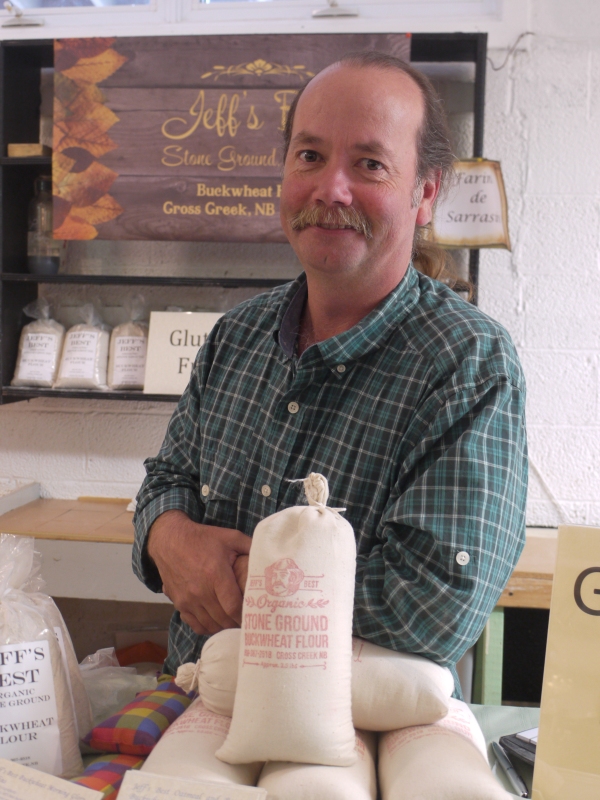 Every Saturday morning a special market takes place in downtown Fredericton. I went shopping to see if I could find some history lurking in the food stalls at the Fredericton Boyce Farmers Market.
And find it I did. Here are the vendors I met who sold their wares and when I asked….. told the history with it.

Buckwheat Flour – Jeff’s Organic Stone Ground Buckwheat Flour
Jeff Chamberlain stood proudly behind cloth bags of flour. He told me how he grows organic buckwheat on his farm and grinds it into flour every week to bring to the market. His grain is also sold in the gift shop (with different packaging) at King’s Landing historic village where he works.
Jeff explained that at one time, buckwheat was the only flour available. Until the early 1900’s every farmer grew his own buckwheat, he said, and the worse the soil it is planted in, the better it grows.
Jeff produces flour, sells the bran from the milling process for pig food and uses the hulls to fill pillows. Every bit of the buckwheat grain is used.
Jeff has recipe cards sitting in front of the flour to give the buyer ideas of how to make delicious use of his flour. Jeff’s Best Oatmeal and Raisin Buckwheat Cookies, Jeff’s Best Buckwheat Tortillas and other recipe cards give ideas for using the flour.
I used it for the first time Jeff, and I am hooked. http://www.frederictonfarmersmarket.ca/vendors/jeffs_best 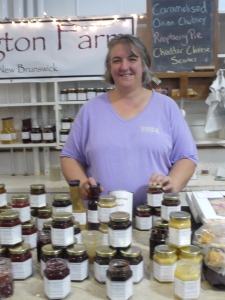 Baked Goods and Jams Using Traditional Recipes
At the Warrington Farm stall at the market Sue and Keith Warrington sell a huge variety of baked goods and home preserves.
Sue loves to cook using old recipes and is interested in food history. She showed me her Eccles Cakes, British Welsh Cakes, Sticky Toffee Pudding, Scotch Eggs and her bottles of Lemon Curd. Those delicacies have been made for generations in Great Britain, Wales and Scotland. Sue uses a traditional wood stove which she uses mostly in the winter.
Warrington Farm, Harvey, New Brunswick (506) 366-3242

Heirloom Vegetables – Gagetown Fruit Farm.
Matthew Estabrooks stood beside an artfully arranged table of vegetables. When we started to talk, I learned that he grows and sells many types of heirloom tomatoes. I had heard the term heirloom used to describe vegetables before but didn’t really understand what it meant.
Matthew explained to that heirloom seeds have been saved for at least 40 years and many have even been saved since the 1890’s. Some were brought from Germany and Russia. He buys his seeds from a company called Baker Creek Heirlooms. http://www.rareseeds.com
The second time I looked at the table of vegetables they looked different. There were purple carrots French Fillet beans and heirloom Tuscan Kale. Those vegetables now had history and very interesting names and my guess is that they even taste better!
You can reach Matthew at gagetownfruitfarm@yahoo.ca

A bakery stall sold bread baked from a recipe from the Bible. History was everywhere at the Fredericton Boyce Farmers Market.

For more information about the Fredericton Farmers Market http://www.frederictonfarmersmarket.ca