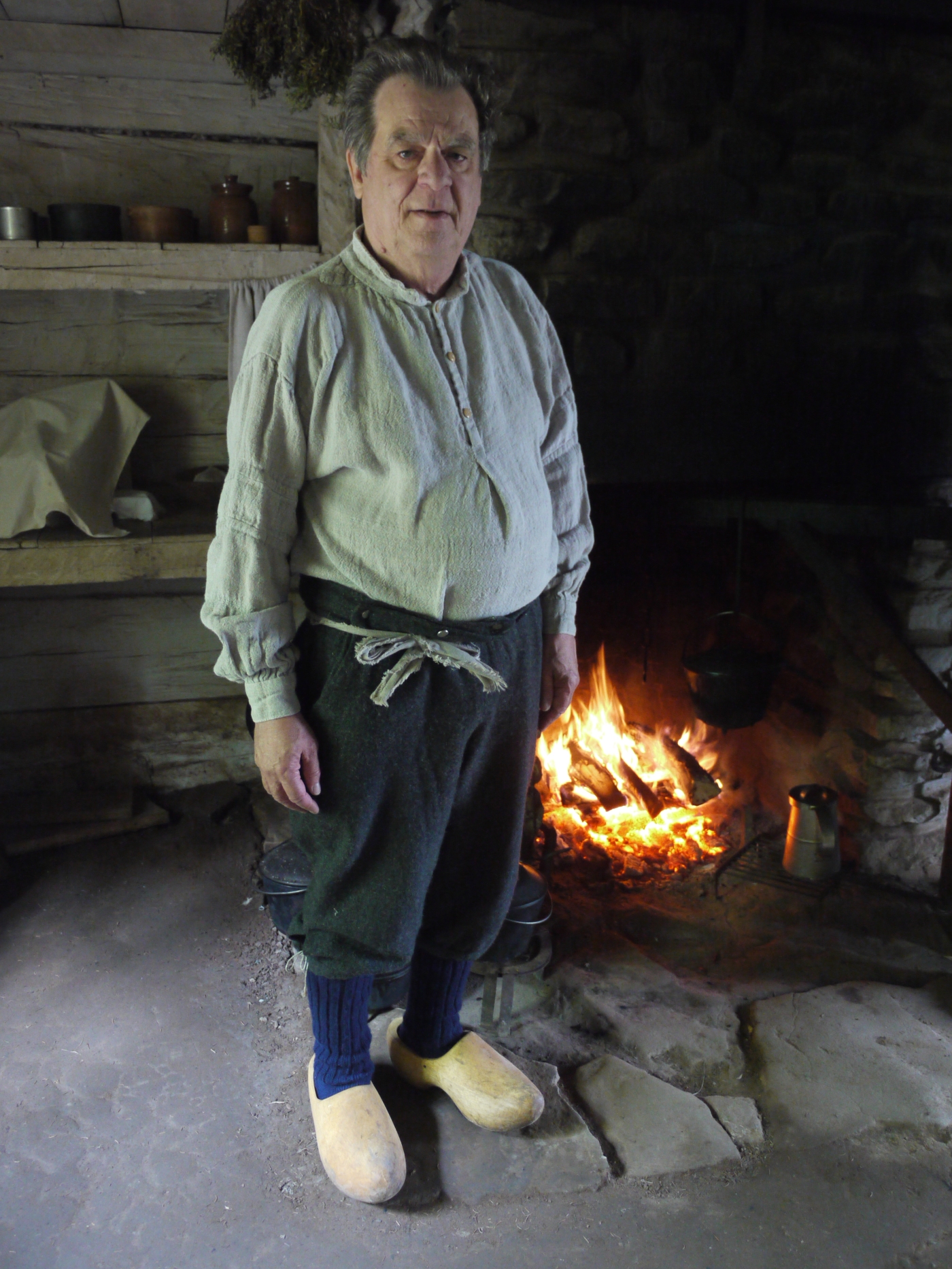 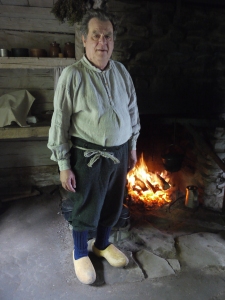 It was Friday and the smell of fish cooking came from every home in the Acadian village. The Catholic faith of the villagers required no meat on Fridays, so as I dropped in to visit I would see the varied ways fish was cooked through the years in the Acadian tradition.
I was visiting the Village Historique Acadien in Caraquet, New Brunswick. On a quiet river side is a cluster of Acadian buildings, each one moved from a different region of the province to showcase life as it existed from 1773 to the 1920’s. The village is alive with interpreters in period costume. Visiting period homes, I saw food being cooked as it would have been through the years on everything from open hearth fireplaces to ornate cast iron woodstoves.
Visiting Homes at Dinner 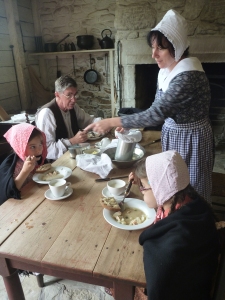 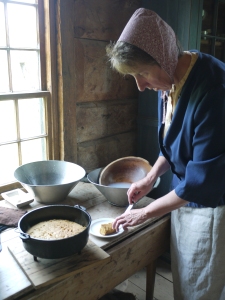 In many homes, dinner preparation started early in the day ensure the meal would be ready for the hardworking family by midday. Each home prepared a regional meal representing that home’s original location.
In the tiny log cabin by the river, Mr. Martin shows how he cooked dinner in 1773 using cast iron pots over the open hearth fire. He was cooking a simple meal of salt herring with potatoes for his meal that day.
In the 1852 Cyr farm from the Saint- Basile area the kitchen was buzzing with activity. They were preparing Salmon in a sauce and potatoes, a cornmeal cake, and Tétines de souris (translates into “mouse’s tit”.) The Acadian names of some foods have a smile cooked into them. This Cyr family used a cast iron stove situated in the middle of the house to provide heat for the home as well. That day they were baking bread in their outdoor oven, and the smell must have attracted farmers in far away fields to come home for dinner. The lady of the house told me that to test the temperature of the oven after burning wood for hours; she would put her arm in the oven and recite the “HAIL MARY”. If she could leave her arm until she completed the prayer, it was cool enough to add the bread. She could tell it was done “just by the smell.” 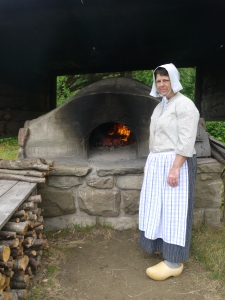 In a quiet village corner sits Poirier Tavern. In the dim light of a single oil lamp, bartender LOUŸS PITRE regales me with intoxicating drinking tales of days gone by.
“Booze back then was called medication”, he told me. And a proper lady would steer away from the tavern until as recently as 1960. Jamaican rum was imported but local men would also try to brew their own using potato peelings. This process used the same ingredients for brewing and bread yeast making. The men had to be careful not to incur the wrath of the women of the village who were highly protective of their yeast. 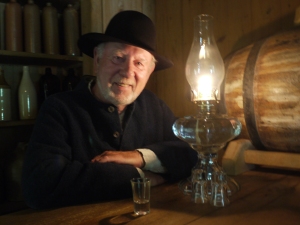 At the Léger House that once stood proudly in Memramcook, they were cooking as if it were 1836. The woman of the house explained that she was boiling potatoes in salted herbs. The oral recipe she gave me for salted herbs was:
Cut the tops of green onions and put layers in a jar alternating with layers of course salt.
She told me that she would use this as well as summer savoury as the two seasonings for most of her cooking. 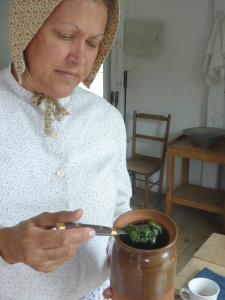 In Madame Godin’s 1890’s kitchen dinner would be Fricotte à la truite with potatoes and onions and an apple pie made from dried apple rings. She had numerous pots cooking on different parts of her woodstove.
“Cut the core from the apple she told me, slice the apples, string them up and hang to dry. This preserves them until you add water to reconstitute and sugar to make the pie filling.”
In each home, if I happened to drop in just as the food was cooling on the oven, I was invited to taste just as in days past when visitors arrived and Acadian hospitality was offered.
Tasting Acadian Food at La Table des
Watching all this cooking made me hungry. I stopped into La Table des Ancêtres, located in the Dugas home. Here, traditional cooking is served for visitors in the 1867 home. The menu is brought to the table on a small chalk board.
I tried the yellow eyed beans served with a side of molasses, biscuits and blueberry cake for sweets (the name for dessert.) It was a simple and very delicious meal made using authentic recipes from the past.
As I took the path out of the Acadian Village and back into the future, I could hear families laughing and enjoying dinner together as I walked past each home.
I took with me the secrets of the proud Acadian women who cooked what they had in the best way they knew how, all the while adding love, care and laughter to their recipes.

Visiting the Village Historique Acadien
For information about the Village: http://www.villagehistoriqueacadien.com
Visiting times: June 9 to September 15/13 from 10 AM to 6 PM

September 16 to Oct. 5/13 – a guided tour each day at 10AM
Dining out in the Village:
La Table des Ancêtres: offers traditional meals served in a historic setting by costumed interpretive staff.
Staying in the Village: Hotel Château Albert
This Village offers a unique sleep over that truly takes the visitor back in time. 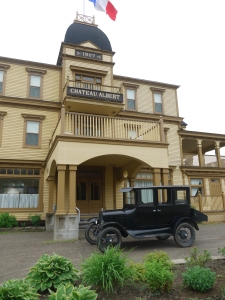 Hotel Château Albert is a replication of a Caraquet hotel that dates from 1907. From the time you are picked up in the “hidden parking lot” in a Model T Ford and delivered to the front door of the hotel to the minute you are returned to your car, you experience a night from the past. The guest rooms are furnished in reproduction furniture and not even a modern light switch, television or telephone gives away the secret of time. Dinner and old time theatre are offered in the hotel nightly during the summer.
For more information: http://www.villaghistoriqueacadien.com/hotelchateaualbert.cfm
Children of the Village is a program that invites young people between 7 and 12 years to dress as in the past and join a family in a traditional meal. They also learn the work of running farms and craftsmanship in the village.

7 thoughts on “Acadian Cookery at the Village Historique Acadien”